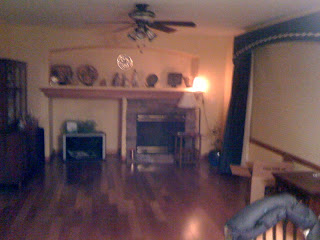 Our house is emptying out!! Yesterday we sold the leather couch, love seat and matching chair, a bunch of kitchen stuff, plants, cookbooks, book shelves, my diamond ring, snowshoes, the butcher block island, and DVD's. Today Andrea came over and bought the lazy boys, tomorrow the lady who bought the couches is coming back over to buy the pot rack. Next weekend I'm going to pack up the rest of the yellow room and it'll be empty once Dan's sister comes over and gets the china cabinet. One room down. I broke out grandma's old lazy boy chair for Dan (I have to keep mine - the one that now belongs to the new owner of this house - cuz otherwise the dogs can't sit with me) and it's a little small for Dan, but he says its fine.

I sent out some emails last night for some rentals in Kauai. Got some email responses as well as a phone call. The emails said to look them up when we get out there. The lady who called was very nice, sounded like a native. The place is pretty far out by a military base, it's a house divided into 3 separate homes. The one that is available is upstairs and an attic separates it from the other unit. She was fine with Baxter and Lucy. So maybe we only stay there the first month. Dan found a job in the Kauai newspaper for a Audio/Visual Tech Specialist. He would provide services for concerts, conventions, whatever. He sent the posting to my girlfriend Ilissa to see if she'd herd of the place because she does that sort of thing on a large scale. She'd not only heard of it but used to work there as a Director Of Sales. They talked for a long time, she gave him tips on wording and what the job would entail. She said to use her as a reference. It seems like things are starting to come together.
My uncle is coming to visit us next weekend, he and my aunt live in Texas and they want to see us before we go. They are so sweet, my uncle is really funny. The only ones in my family who are really making an effort. My brother came over yesterday to buy some stuff. 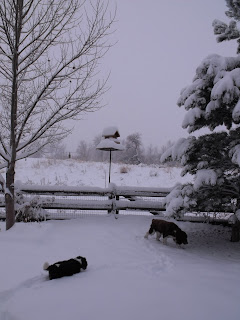 While we got about 9 inches of snow, Kauai is flooding out. The guy I met on Face Book the other day is excited about it and Kauai's Hindu Monastery had a video where they were outside, watching the Wailua river flood out with big grins on their faces, standing in 6" of water in flip flops. It's not so much fun for others, some had to be evacuated from their homes.
Friday my boss had our monthly meeting and fortuitously, I was the only one who showed up. We had a honest discussion of my frustrations as well as his and Dan's. I understand now his position and know that things will never change in that department. Not as long as the "child" is running things! I can leave now, with peace. No hard feelings. It has been a great place to work and grow, mentally and financially.
Dan and I are eating like crap and I am not inspired to do much, like blog, so sorry for the lack of posts. I can't believe how exhausting it is to sell all of our stuff. Luckily, Dan and I are doing great. No arguments, some impatience but that is temporary. I actually cooked today. I haven't felt like doing that lately either. We have been living on Isagenix shakes mostly during the work week. We have been eating burgers and fries, ice cream, pastries, eggnog lattes. Sugar, sugar, sugar!!
Posted by Aloha at 3:55 PM No comments: