My Best Friend is in Trouble Last Sunday we went to a ranch to interview and photograph a local rancher who raises grass-fed beef. It was a beautiful day, just big blue skies and endless emerald mountain ranges. The rancher invited us to his weekly family BBQ later that afternoon, so we went to interview a local sprout grower before heading over to eat cow’s tongue and Rocky Mountain oysters. 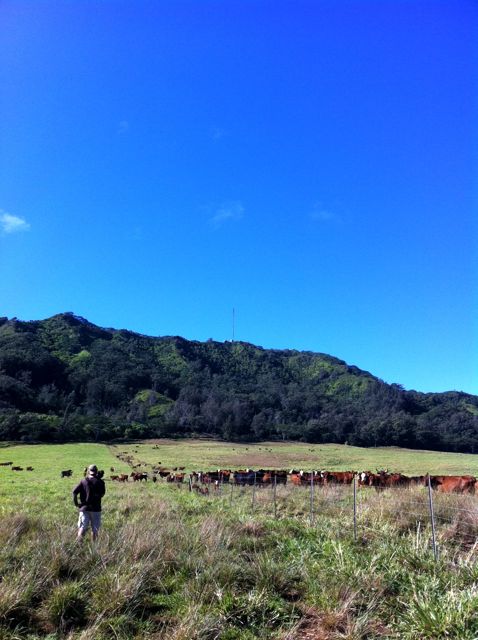 Wednesday I took Baxter and Lucy for a walk. Baxter seemed kind of down, and I figured he needed to get out and run along the beach. He did what he normally does, with as much vigor as usual. He retrieved the padded frisbee from the ocean for about 15 minutes before we took a 45 minute walk along the shore. 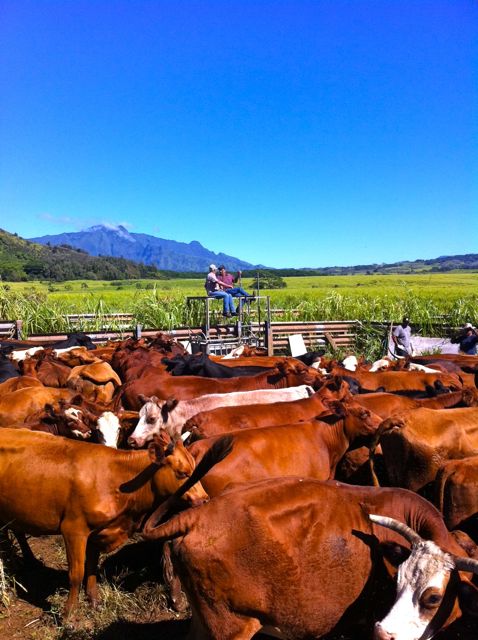 As I drank in the view; big blue skies, puffy clouds, crystal clear water the color of lapis and turquoise, the long expanse of white beach, Baxter and Lucy frolicking in the sand and surf, I thought, "I am living my dream. This is it. Right here, right now, I am living my dream." And I felt my stomach do a summersault. 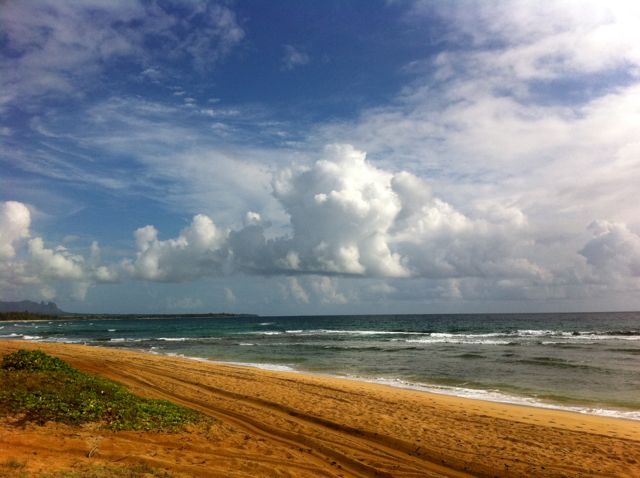 Baxter usually runs about 20 feet ahead of me, runs back to make sure I’m ok, and then runs back out. He probably walks three times more than I do. He started to look back at me pretty frequently, something I learned to recognize as his way of wanting to turn back, but at the same time, not wanting to. So we turned around.
On the way home, he yacked. Not unusual, I thought it was because he drank sea water. He slept when we got home, not unusual. But he wouldn’t eat and yacked up foam in the middle of the night and first thing Thursday morning. I made an appointment at the vet. I had one for a week later, because he was being really finicky about food. I thought his teeth hurt, plus, his breath was awful.
I was working on my computer before my workout with Paula. Baxter rested his head on my chest and passed out. Normally when he does this he’s awake and moaning, wanting me to pet him. He doesn’t ever fall asleep there.
Tears streamed silently down my face when the vet said he had chronic renal disease. They were coming so fast I couldn’t look at her. My tears dripped onto Baxter laying by my side. They wanted to keep him, and put him on an IV, to try to flush the toxins out. They wanted to keep him until Saturday.
The disease is common in dogs and cats. It slowly destroys the kidneys until they are close to failure. The symptoms are so subtle, that some folks don’t notice until it’s too late. Symptoms are nausea, loss of appetite, fatigue, bad breath, and drinking lots of water.
I have never cried so much in my life. In retrospect, at 45, I guess that’s a good thing. But, all I could do that night was cry. I couldn’t help myself. A simple thought or image of him would pop into my mind and I was wracked with tears. After a couple hours of sleep I woke with eyes that were swollen and puffy.
I got up and made some lemon-ginger muffins. This is a purely selfish but nifty trick. People love baked goods, and I don’t think our doctors and dentists get enough love. Several years ago, before my eye surgery, I brought the staff big fat chocolate chip cookies I made the night before.
The lemon-ginger muffins were delivered with a note that said, “Baxter and his family thank you for all of your TLC. Please enjoy these lemon-ginger muffins.” The staff was thrilled, the muffins disappeared, and Baxter was not going to be forgotten about!
Friday was my cooking day for Larry and I was thankful for the day-long distraction. Dan, Lucy and I went to see his B-ness first thing in the morning, then Dan took us home so I could get cooking, while he drove to Kilauea to meet with a new client. We went for another visit that night before they closed.
The plan was to get his “blood levels” (whatever they are supposed to be at) normal. If we can stabilize him with a special diet, he may live one more month or one more year. Roxanne, our vet tech and daughter of a friend, printed several pages from a book she just got (she has a book for everything). The copies contained recipes for the new diet Baxter needs to be on. Of course they have dog food for sale there, but hey, I’m cookin for my dog!
From now on Baxter needs to be on a low protein diet with simple carbs like white rice, tapioca, and potatoes. This will make it easier for his kidneys to process the food, which is what he needs since he’s running on about 25 percent of his kidney’s normal 100 percent.
Saturday morning I woke at 1:30. The house felt empty without him. He was not snoring softly by my side. He was not laying on the ground for me to trip over on my way to the bathroom in the dark. I went outside to smoke my e-cig and cry without waking Dan. 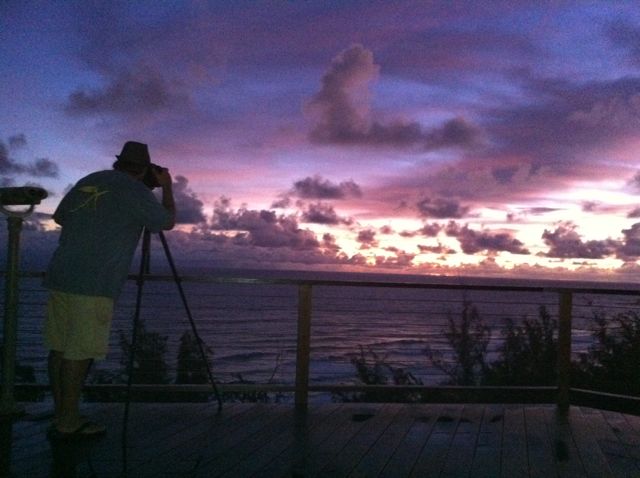 Dan was awake by the time I came in, and we had a good cry together. It was 4 a.m. and he thought we should go shoot a sunrise. The client he met with yesterday wants him to do realty photography for a 20 million dollar home she is the property manager of. The photos include ariels from a helicopter, I told him to put an assistant in the budget! We decided to "test shoot" the sunrise there. I brought Lucy, and we watched the sun rise over the ocean as Dan took pictures. 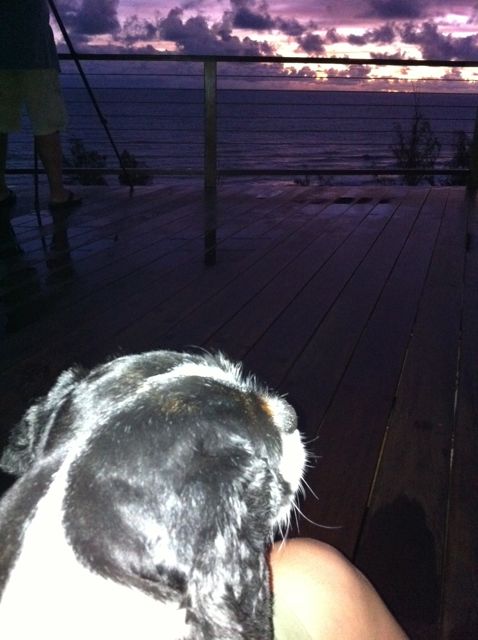 On the way back we stopped at a coffee shop for a bagel. Roxanne was there getting breakfast before she went in to draw Baxter’s blood to make sure he could come home later that afternoon. 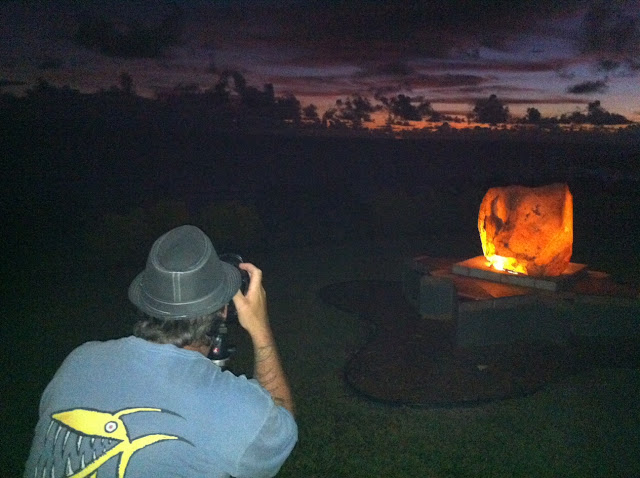 While Dan processed his photos, I haunted the east side of the island for the necessary ingredients. I needed chicken fat, and a lot of it. About three tablespoons a day. I asked the meat guy at the grocery store if I could have the rendered fat from the rotisserie chickens. Once I explained why, he did his best to get me some. But, he was overruled by the store manager because she didn’t want anyone getting in trouble. So, I bought a $12 whole chicken to rotisserie myself. 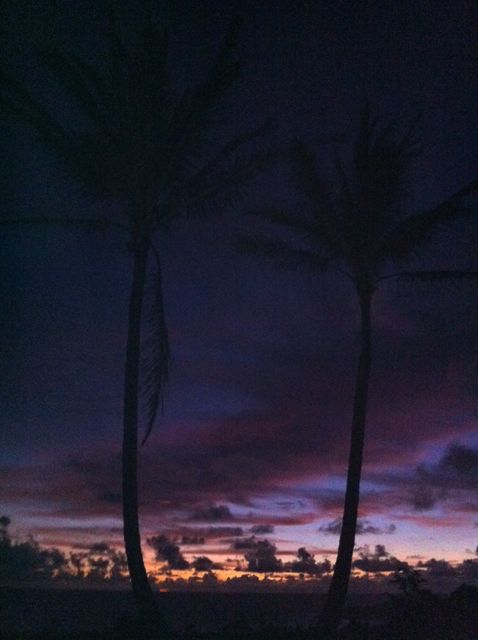 I got jasmine rice, tapioca, potatoes, ground beef and multi vitamins. A side effect of this disease, drinking a lot of water, means he is trying and compensate for what his kidneys can’t do. Since he’s going to be peeing a lot more he needs vitamins. 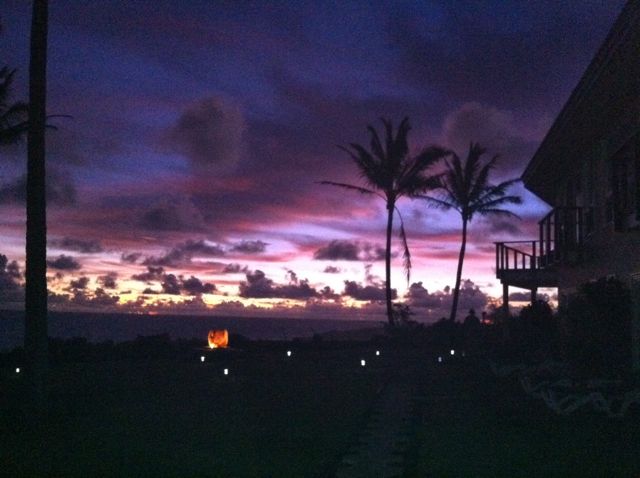 In the checkout line, I saw a friend. She was there with her assistant who said, “What’s wrong? You look sick.” I’m sure I did. Tired, puffy-eyed, sleepless and put together just enough to not get arrested for streaking in public. 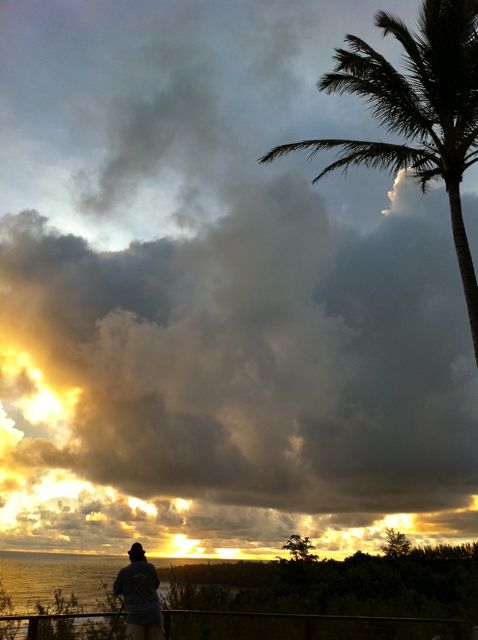 When I told her what happened, and of my search for chicken fat, she took matters into her own hands. She knew the store manager and went to ask her. The manager was a little miffed because she already said no. My friend’s persistence and reminder that, “It's going to pig farmers, why not a dog?” and “Come on, just a little, please? It’s for her sick dig.” Won the manager over, but my big mouth made her turn back. 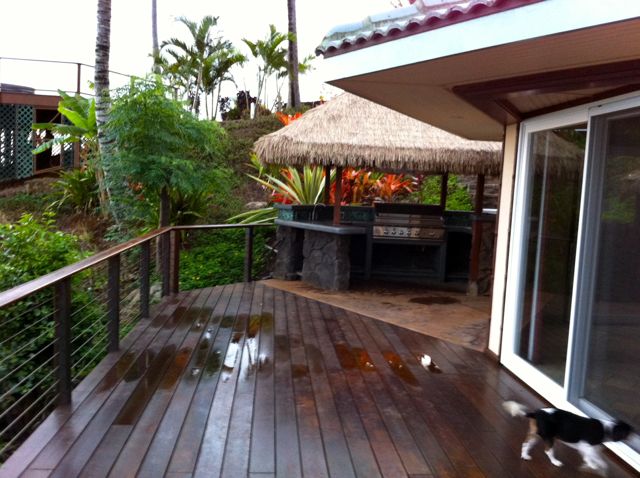 The manager said she was going to go and see what the meat guy had. In my state of mind, I didn’t notice she was going to break her rule. Probably just to get my friend out of her store. As she walked away, I said, “He doesn’t have anything for sale. I asked. He only has the rotisserie fat.” With that, she turned around and walked behind her desk, and without another word, went back to work. My friend gave me the stink eye. 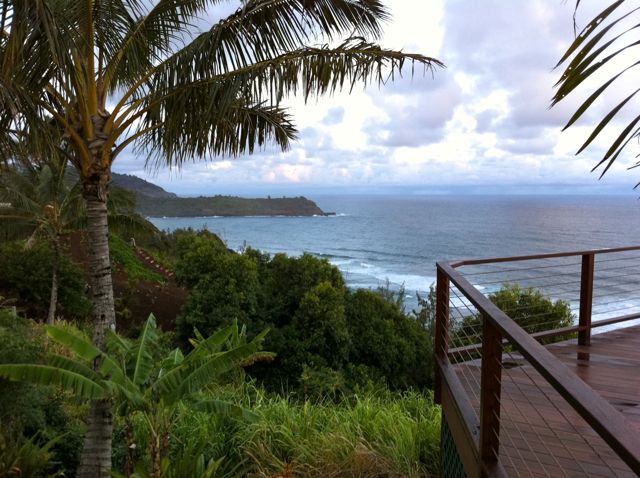 It was raining, and she and her assistant had walked over, so I drove them to the bakery across the street, which my friend owns. In the parking lot, her assistant—who is still in high school—felt compelled to help. She said she didn’t like chicken fat, and had some chicken breasts in her freezer. She said she would bring them to the bakery for me on Monday.
I went to the health food store because another thing Baxter needs is calcium carbonate. The girl in the vitamin section is a friend of Dan’s, from when he worked there. I relayed my mission, and she had such compassion, her eyes teared up.
They didn’t have the calcium but they did have tapioca—4 oz for 5 bucks, he needs 2 oz 2x a day!—so I went to the vitamin store.
Armed with all the ingredients I came home, got the rotisserie out of the shed and the chicken in it before putting the potatoes on to boil. And I went to pick him up! They pumped the rest of his IV fluids under his skin, and we came home.
He is home now. He still hasn’t eaten, but he will drink. This morning (Sunday) he walked out by himself and sniffed around the yard for 15 minutes before coming back up. I take this as an excellent sign. Although, he turned his nose up at my home made meal.
The vet said he could live for another month, or another year. I found a website dedicated to people who will go to great lengths to keep their best friend around a little while longer. This includes making home cooked meals, and putting fluid under their skin every day. 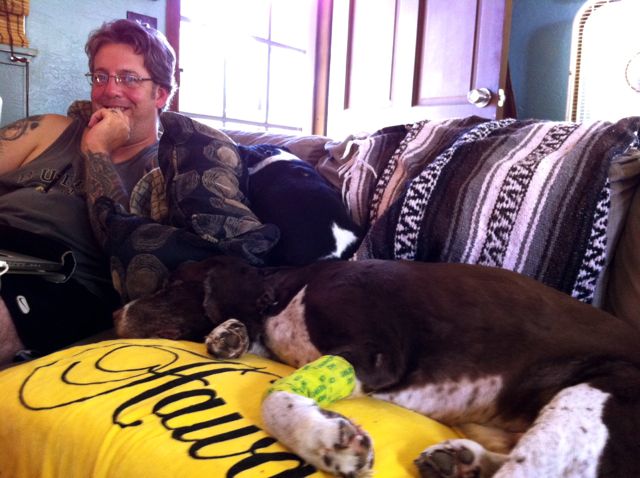 I have promised him I will take care of him. I will hold him so he doesn’t feel as scared, so he doesn’t feel lonely, so he remembers he is loved. I will cook him meals and bug him to eat. I will wake him with the water bowl placed under his nose. And, when he is suffering too much, and I can see in his eyes that he is ready to go, I will let him go. 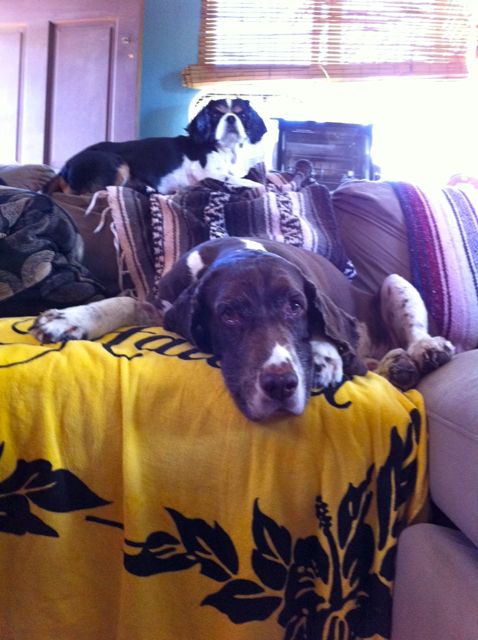