It seems I am getting used to the weather patterns here in Kauai. In Colorado, when I was growing up, you just knew to be done with your hike around 4pm. That's when the rain would come in. Here in Kauai, specifically Kapa'a, it rains in the morning. There are big grey storm clouds outside the window to my left. The window to my right shows me big puffy white clouds and a blue, blue sky. Azure blue. There is a slight breeze and the birds are busily getting their day on. I have no idea if it's going to rain but I know by 10am it'll be hot. Up north, where I'm headed in about an hour, could be a whole different story. They get more rain as well as a lot of sunshine.

Twice  a year Kauai has a seed exchange. You come bearing seeds and seedlings or nothing at all. You leave with plants and seeds, the only conditions are take what you need, plant what you take. The afternoon was warm and we were all gathered under the big shade tree in front of the All Saints Gym, waiting for the blessing to start. The monks from the Hindu Monastery, just up the street mauka side, were to make the blessing and were running late. This gave us a chance to have Jillian and Gary check out the website to make sure we were on the right track. They really liked it and Jillian made some great creative suggestions. 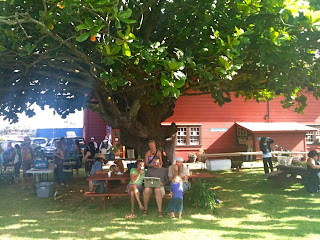 Jillian, Dan and Gary. Azure is running around front there.
We all decided to get some drinks and as we headed to the jeep, our reusable grocery bag full of aloe vera, begonia, habenero chili pepper, cherry tomato and a curry leaf tree, we stopped to chat with Sun and his wife Lisa. They own One Song Farm and Dan buys produce from them once a week. He said I would really like Lisa, and this is the first time I have met her. Dan was right, I really like her. Calm, kind and confident she listens as I explain how fortunate we have been since we decided to move here. I tell her everything is lining up better than we could have imagined. I'm waiting for the ball to drop, not ready to embrace this luck yet. She tells me it's because we came here committed to make it work and with an attitude of service. The island has a lot of transient people because they come here and take. We are giving back through our work. She is tired after spending yesterday at the Hanalei Farmers Market. Sun, in another car parked next to her where him and Dan are talking, starts making noises that he wants to leave and Jillian is calling wondering where we are at. We break up and head over to the Oasis for drinks.

The Waipouli Resort, which houses The Oaisis, is only about 4 years old. Eileen and Gary remember when it was just a beach and they would camp there. They laugh, amazed at what it has become. I know the Oasis is for tourists and I'm a local now, but, I love it there. It's clean, beautiful and right next to the ocean. 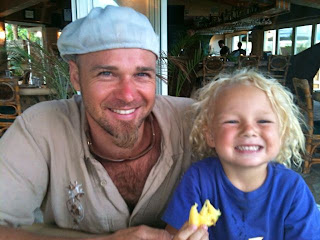 Proud papa Gary with his son Azure.
We decide to get dinner at Chutney a new Indian restaurant here in Kapa'a. I'm loving the fact that this time the whole day is being spent in our neighborhood! We walk past Bill Kuetzmann (of Grateful Dead fame) and Eileen stops to say hello, she does his gardens. Dan walks slowly by, hoping to finally meet him, but no luck today. They don't have a liquor license so Jillian and I walk up to the ABC Store to get some beer while Gary orders tons of appetizers and Dan is on the phone placing an order with a farmer. We fill our bellies with great Indian food and I give our waitress my card (at Jillian's suggestion) and tell them we have a farm up north and would love to sell them produce.

Dan had to go in Monday morning, his day off, for an hour to set up an order with a new supplier on the mainland. While he did that I got started on my job. I love that I can work from home! The day ended with a phone call from Jillian. On Sunday I had mentioned to her that I was concerned about my catering gig that is swiftly approaching. I told Aqua Engineers that I would make kaula pork for 50 people!! I realized that if I made it in the oven it would be in there for hours heating up the whole place. I'm sure the clients wouldn't appreciate that! So, for the past several days I have been wondering how I could get around that. If it takes 3 hours in an oven at 400 degrees to make a 3 pound pork shoulder what would it be like for 15 pounds?!! Could I do it on a grill? If so, how long would that take? Would I wrap it in foil or it leave it uncovered?

Her happy voice rings through my phone, "Guess who just stopped by"? "Adam Sandler?" I say, he is staying across the street now. "No", she says. "Nicolai, my pork guy." He and his friends hunt wild boar and he gives her some for a veggie trade, he only eats salads!! Normally, he sells it for $5.00 a pound but Jillian is GIVING me 15 pounds for my catering gig! Not only that, it's going to be cooked! Her and Gary have an imu, a Hawaiian fire pit, on the property. Phil from Na Keiki O Ka Aina is coming over next weekend to do a whole pig for a luau he is doing. She says she will prep the pig for me and stick it in the ground with Phil's stuff. He is getting there at 4am and putting the pig in at 9am. It'll be done by 3 so Dan and I will come to help pull it out and shred it. She is going to keep it in her freezer for me since mine is so small. I can't believe it! What great fortune, those folks at Aqua Engineers are getting more than their monies worth on this one. Pork cooked in an imu is one of the greatest treats in the world. So succulent and delicious!

Again, I am amazed how everything is turning out, lining up so perfectly. Dan and I are as happy as when we first met, only better. I am so thankful that I listened to my intuition and signed up for those farm classes. I had no idea why I was doing it, just following an open door. Jillian is turning out to be our saving grace. She helped Dan get his job, hired me, and is so giving and supportive. We are going to be life long friends I am sure!
Posted by Aloha at 8:02 AM No comments: