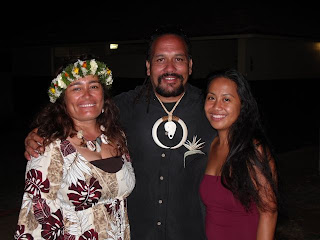 Ali’i Nuii Aleka Dayne Aipoalani with his wife (left) and Puamana
Aliʻi Nui were ruling chiefs (in Hawaiian, nui means grand, great, or supreme) and must claim parentage at least of a mother of the highest rank.


Dan and I had the good fortune to meet the King of Hawaii. It all started out innocently enough. I called our friend Puamana to schedule two massages for mom during her stay here. She asked me about my new work for MidWeek Kauai. I explained what I would be doing and said "ultimately, I would like to learn about Kauai: it's people, places and history and write about it. Connecting residents and visitors while sharing what I learn with the world." So, she invited us to a celebration. The Celebration of the Polynesian Kingdom of Atooi is a week long event celebrating and acknowledging the Royal Union of the Pacific Nations and the inclusion of the King of Hawaii. Atooi is the original name of Kauai.
On September 11th 2009 the King, having proved his bloodline to the state government, indigenous leaders and the United Nations, was officially recognized as the King of Hawaii. This week the King has been celebrating with 15 Kings and Queens of the Polynesian Triangle. This is a historic event because the leaders of the Polynesian Triangle unite whenever the Triangle is breaking apart, which seems to occur every 200 or 300 years. The last time it happened was in the reign of King Aipoalani's ancestor, King Kamehameha 1.
Puamana, a friend of the King, introduced us and he generously spent about an hour of his time passionately and reverently explaining the details. Coming from a place of deep love and spirit he is interested in communicating the Kingdom's story, lineage and mission to the world. It seems I am to help communicate this story through my writing.
We are invited to become citizens of his Kingdom and are meeting Puamana at 10am back in Waimea where she too, will become a citizen. At the same time, the King will be meeting with the King of Tahiti and has invited us to come. He wants to show us his ancestral lineage, listen in on the meeting, and talk to us about his plans. He has the flag that was flown during Queen Lili'uokalani's reign, the last reigning monarch before the business community backed by the US government in 1893 took over the islands.

Ali’i Nui Dayne Aipoalani is leading the Sovereign Polynesian Kingdom of Atooi in the process of organizing, instituting, and forming Subordinate Councils, whose rules, regulations, and by-laws shall be promulgated to protect and uphold the supreme authority of the Customary Chiefs (Konohiki) and People (Native Tenants) whose sovereignty in the National lands has never been voluntarily relinquished. It is expected that you will comply with the various international instruments and laws as well as US executive orders, proclamations, and regulations that insure protection of our RESERVED rights in accordance with our true identity as the original Inhabitants under the United Nations definition in Chapter XI-Declaration on Non Self Governing Territories.