Dan and I got to do two beachside restaurant reviews and a luau this week. First was the Mediterranean Gourmet, an hour away up on the North shore. Run by a husband and wife team they specialize in Lebanese food, where he is from. We had pita bread with ginger hummus, sun-dried tomato hummus and curry hummus. A bulgur, tomato and parsley salad called tabouleh and watermelon bruschetta with feta cheese. Needless to say we had the leftovers for dinner! 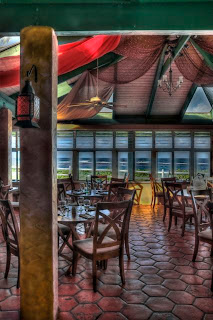 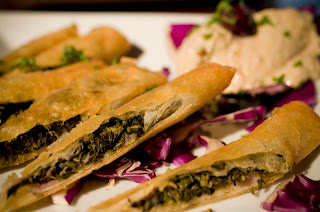 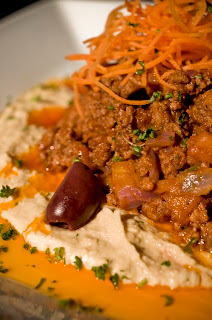 Lahkme Benadora, a Lebanese comfort food made of diced steak, jalapenos and onions on top of ginger hummus.
Two days later we went back because the couple invited us to experience their luau. Fresh exotic flowers embellished coffee tables and a bamboo trellis running the length of a wall. Tourists laughed with glee at the Hawaiian entertainers who sang haunting songs and made silly jokes. We were both mesmerized by the rapid movements of theTahitian dancers and their lusty hips. The Polynesian version of the tango.
A couple of days later we found ourselves at the Beach House, an hour to the South in Koloa; winners of Honolulu magazine’s Hale `Aina (Home Land) award for 2011 Best Restaurant on Kauai (Mediterranean Gourmet came in second). Fresh local fish is their specialty and we enjoyed wasabi and panko crusted uku (Hawaiian snapper) and a watermelon salad with candied macadamia nuts and gorgonzola cheese. I’ve had watermelon three times since we got here, twice in the last week! 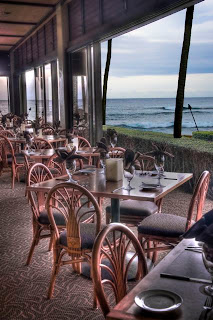 The view at the Beach House 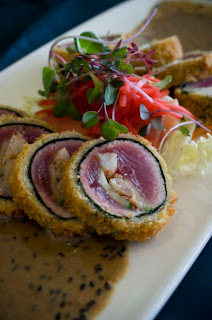 Crispy Stuffed Crab Roll with just caught Ahi and soy wasabi sauce flecked with black sesame seeds
I decided I needed a hair cut to represent my new pilgrimage to be the best version of me possible. Plus, what is the point of having long hair if it’s always tied back? I try to wear it down because everyone tells me it looks better, but it always goes back up. The heat and humidity getting the better of me. I really don’t know how the local girls do it! 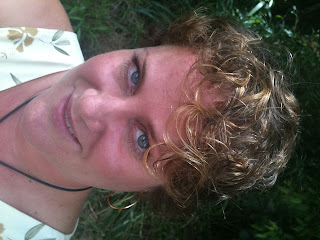 Right after I got my hair cut 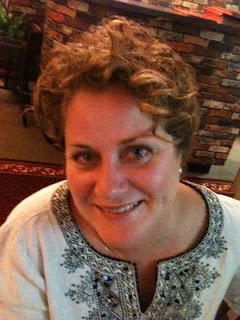 I am trying to make it look as cute as the hair dresser did. I haven't had to style my hair in a long time yea?
I started a Bikram yoga class. For those of you not in the know, it’s where you do yoga in a 110 degree room. Sounds crazy for someone who doesn’t do heat well; someone who turns beet red when my temperature rises above 98.6 (Dan says it’s my Scottish blood). I happen to love Bikram yoga. The heat loosens my muscles and I can go deeper into the poses. Cleansing sweat drips onto my towel covered mat and I imagine my demons leave in those tiny droplets.
Dan picked up a new client. The travel agency I write for hired him to do their graphics (mahalo Cindy’s Group!). His delight in creating graphics makes for pleasurable afternoons as we work side by side on our office/couch. 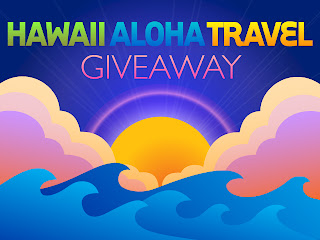 Hawaii-Aloha Travel hosts giveaways and contests, play often!!
I made two amazing things this week that I’d like to share. Fresh Thyme Cheddar Scones were inspired by the pouring rain we’ve been having for three days and a care package in the form of soup from our friends at Tutu’s Soup Hale. The Beet-Feta Tart was brought on by the need to prepare beets in a different way. Beets are in abundance at our local farm and this is the third week in a row Dan has brought them home. We are lucky because we get a small refrigerator full of organic produce every week directly from our farmer for 15 bucks!
Aloha Nui Loa 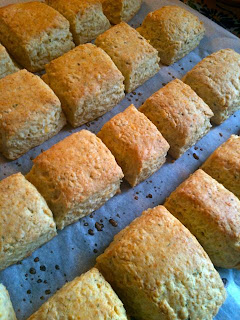 I used fresh thyme instead of black pepper because I had some.
3 cups King Arthur Unbleached All-Purpose Flour
2 tablespoons baking powder
1/2 teaspoon baking soda
1 teaspoon salt
1 tablespoon granulated sugar
1/2 cup (1 stick) unsalted butter
1 cup (4 ounces) grated Cheddar cheese
1 tablespoon coarsely ground black pepper*
3/4 cup (6 ounces) buttermilk or plain yogurt
milk (for glaze)
*This amount of black pepper will make very spicy scones. For less heat, decrease the amount of pepper.
In a large bowl, sift together the flour, baking powder, baking soda, salt and sugar. Cut in the butter and cheese. Stir in the black pepper. Refrigerate the dough for half an hour. Gently stir in the buttermilk or yogurt. Gather the mixture into a ball with your hands, and on a well-floured surface roll or pat the dough into a 12 x 8-inch rectangle approximately 3/4-inch thick.
Grease a baking sheet. Using a large spatula, or a couple of spatulas, transfer the dough to the baking sheet. Use a dough scraper, baker's bench knife or a knife to cut dough into 1 1/2-inch squares. Separate the squares slightly on the baking sheet. Brush each square with a little milk.
Bake the scones in a preheated 400°F oven for 15 to 20 minutes, or until they're very lightly browned. Yield: about 40 small scones. 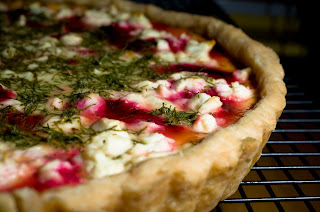 Preheat the oven to 375 degrees Fahrenheit.

On a lightly floured surface, roll the pâte brisée into a circle large enough to line a 9” round removable-bottom tart pan. Transfer the dough into the pan, pressing it gently to the edge and up along the sides. Line the dough-lined tart pan with a sheet of aluminum foil, and place enough beans, rice, or pie weights in the aluminum foil to cover the base of the tart pan in a single layer. This will prevent the dough from puffing when you blind-bake it. Place the tart pan in the oven, and bake for 15 or so minutes, until the edges of the tart shell look set and barely golden. Remove the aluminum foil and weights from the tart pan, and continue baking until the tart shell is light golden. Remove the tart pan from the oven and allow to cool.

Turn the oven down to 350 degrees Fahrenheit.

Meanwhile, cut the roasted and peeled beets into ¼-inch slices. Mix the eggs, milk, feta, and salt in a small bowl or measuring cup.

Arrange the beet slices in the blind-baked tart shell, taking care to cover the base of the shell as well as possible. It is preferable to only have one layer of beets, although you may want to add an extra beet here or there to cover an empty spot. Pour the egg mixture over the beets.

Bake the tart for 40 minutes to an hour, until the filling is set and lightly golden in areas. Allow to cool for at least 10 minutes. Serve warm or at room temperature. 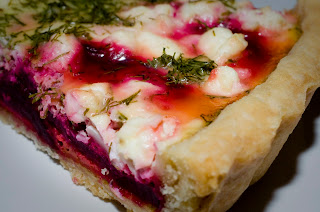