We Made A Friend! 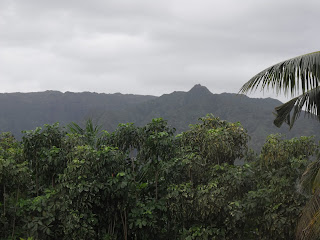 Cloudy, high of 72.
Last night was cold, down to 60 degrees and we broke out another blanket making three on our bed. I like to keep all of the windows open all of the time, so we could have closed those but, why?
We spent the morning reading and napping. My guilt for not finding a place to walk Baxter off leash drove me to read outside. He and Lucy sniffed happily around for about 30 minutes. Having tired of that, they wanted me to constantly pet them so I decided it was time to go inside. Dan, surfing the USGS website and checking out volcano videos, said he would get a tennis ball to play fetch with him in the yard, that would be sure to tire him out. I went right back to my book. Deb gave my the gift of an adventure book when we left. The romantic that she is, she imagined me reading an adventure while on an adventure. I LOVE THIS BOOK! Ahab's Wife, is beautifully written, even poetic. I read it in awe, wishing I could write like that. I can't remember when a book has touched me so. Coming in from outside I continued to read, fall asleep, read some more and finally fell asleep again before putting my book down for the day. 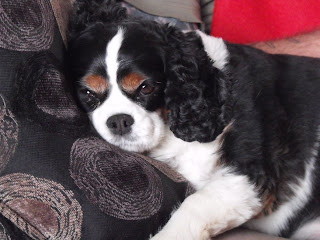 Lucy is happy just being next to us
We were feeling really lazy, we had planned to get some things from the store; the ball for Baxter, 6 birthday cards, and dog food, then go into town and have a walk about. It's so chilly, we have blankets over us while we read, so town didn't sound that fun for a day like today. Forcing ourselves to get off our butts, we made a quick lunch of PB&J's with Maui chips (the best chips on the planet, made for Frito-Lay o_O) and went to the store. Papaya's had the dog food, Foodland had the birthday cards and we dropped off our nephew, Austin's birthday present at the UPS store. I have been reading all the local papers to familiarize myself with the island and had read that Longs Drug was a gourmet store, we had a good laugh. But, it was there and so were we. We still needed a tennis ball for Baxter so we went in. It's pretty cool, a drug store with sections for grocery, booze, island made foods, tourist gifts and toys for the outdoors. 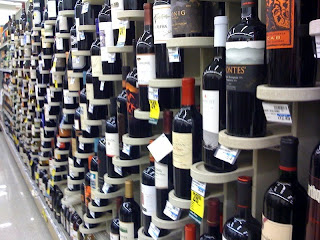 Part of the wine selection at Longs Drug!
We are having spaghetti with eggplant, tomato, red bell pepper, capers, basil, garlic and olive oil (the yummy olive oil from Temecula) for dinner and wanted a nice wine to go with it. Da Kine Wines was a place we wanted to check out. A tiny little wine store tucked into the corner of a strip mall, Da Kine Wines has a small and well thought out wine selection. The owner, Danny, is a sommelier. He is tall, thin, about 28, with blue eyes and reddish blond hair. Growing up in the deep south he went to culinary school, became a wine merchant and moved here when a friend asked him if he wanted to run the store. We buy a Dominio de Eguren and a Venta Morales for $21.00. He is very passionate about wine, food, the island and music. When he finds out what we have done, and that we don't know one person here, he exclaims "you guys are crazy! But then again, I did the same thing!" He tells us that his eye just healed up after getting punched. A native, deciding he was a hippie and exclaiming "I hate hippies" had punched him in the eye. He gives us some tips on how to deal with the reverse racism here. I tell him I have been looking for a place to walk Baxter off leash (I have been putting in requests for this the past 2 days) and he calls up google maps and shows us a place close to home. He gives us a free CD by a local band called Acoustic Medicine and gives us his phone number. He tells us to call him anytime we want to know where to go or eat, or, if we want to do something. He works part time at Merriamn's, on the grill station so he can buy more wine for the store. I had read about Merriman's while I was in Colorado and learned they were opening their third restaurant in Poipu, thinking I would apply there. So our new friend works in a high end restaurant that serves local, organic food, owns a wine store, loves the outdoors and is in a band. Pretty cool!
Posted by Aloha at 8:56 PM 2 comments: