The Blue Jays Are Back! 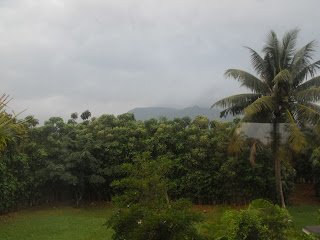 The rain came down hard all night and we were snug, sleepy and dry. The 4 of us cuddled up on our queen size bed, cozy and happy. The neighbors little, yappy dog woke us at 7:15. Our legs still feeling a little weak from the hike, we are in no rush to get out of bed. We talk, pet the dogs and are generally lazy until Dan's mom calls. He is really happy to hear from her, his voice light, cheerful. He is so relaxed, fun, curious, happy, affectionate and childlike. The Blue Jays are back! That in itself makes this journey worth it. Didn't do much today. I talked to Diana about work, she thinks we can work together so when (if) we get set up I'll let her know. Other than that we went into town to do laundry. We decided to make a tradition out of getting a shave ice on laundry day. And, of course, we watched Lost and it did not disappoint!

Of chickens and Roosters
We have been getting a lot of advice via Facebook and emails about how to kill these critters and some have suggested eating them. I can't imagine killing, de-feathering and de-gutting one, maybe if we were starving! When Dan and I were here in June, our kayak guide Justin told us they got out of control because of hurricane Iniki. The worst hurricane to hit the Hawaiian Islands, in 1992, caused Kauai over a billion dollars worth of damage. Justin also told us that it was illegal to kill them, even if you hit one while driving your car. A friend of ours was told the same thing. Another friend, who went to Maui, was told "they were brought to the islands because many years ago there was an abundance of a certain type of (I think poisonous) snake. They were thought to have been brought into the islands (hiding in the wheels & carriages) of jets & airplanes. These rooster & hens were used to destroy them." There are two types of snakes here a blind cave snake and a sea snake. The Islands have never had any snakes other than these. Also, the friendly dog owner Tom told us a story he thought was funny about a lab chasing the roosters and chickens and killing them, running around with feathers in his mouth. We've only been here a little over a week but it seems to me tourists get told some pretty inaccurate things. This got me to thinking. After all tour guides are just like you and me, and maybe some of us, on the spot, who don't know the answer will make something up. He decides it's a good story and he tells his friends at lunch and they all have a good laugh. The next day a co-worker, angry at a rude tourist, decides to tell the same story to mess with them and it becomes (urban) legend. I did a search on the internet and this is what I found from Kauai Vacations.

Wild Chickens, roosters and families of baby chicks are everywhere, running through parking lots, backyards, roads, jungles and golf courses. The roosters are usually a beautiful red color, occasionally speckled with white spots. The hens are good mothers, constantly looking after their small chicks. They do not just cock-a-doodle-doo at first light, but all day too. (And night)
The story about where they came from is that early Polynesians and Europeans brought chickens to Kauai. The Filipinos brought the brightly colored fighting cocks, and Walla, the wild chickens. It is said that with Hurricane ‘Iniki, the domestic chickens and fighting roosters were freed from their cages to roam and multiply. On a recent trip to Tahiti, the same wild chickens were everywhere as well, so I question this theory. But why so many??
Kauai Wild Chicken Recipe
1 Kauai wild chicken
1 large onion
1 bunch seasoning spices of your choosing
1 large rock
Salt and pepper
Put all ingredients into a large covered pot. Simmer over a low flame for several hours. Remove the rock. Discard the chicken. Eat the rock.