Cooking Up A Storm!

Another beautiful Saturday morning, another opening for a chance to post. A couple of months ago Dan bought me a cookbook on Ulu or breadfruit as it's also called. He finally got some in the store (it's in season now) and brought one home. I chose the recipe in which you cube it, pour coconut milk and water over and bake it for an hour. While the Ulu is tucked away in the oven, I think about this past week and all that's happened. Wow! What an amazing week!

Dan is putting in more hours at the store. About 7 years ago Papaya's joined with another couple and opened a store on the North Shore. Two years ago they had a falling out. They went into arbitration to settle on who was going to get the name, the obvious choice being the original owner (whose husband has since left her). She won! So, they are planning a whole new revamp in October and the store in Hanalei will have to change it's name. This means Dan is designing new signs for the store, the "re Grand Opening", as well as redesigning the company logo. He is explaining his new procedures to employees in meetings, expanding the produce department, fixing broken produce coolers, creating a huge network of farmers, and moving our east side CSA pick up there. Right now our CSA members pick at Hoku Whole Foods. He is also my valued and appreciated partner at Kauaian Fresh.

Last week we had our first 2 gigs as personal chefs/caterers. I am trying to increase our CSA membership, especially on the east side. Saturday, I teamed up with Dan, the owner of Da Kine Wine. He featured organic and biodynamic wine and I (as Kauaian Fresh) made appetizers for the Kauai Farmers Coop. It went really well, people chowed on the food, took flyers for the farm as well as for Kauaian Fresh. The only interest I have since received is an email from someone who would love to join the CSA but is on food stamps. She expressed her frustration at not being able to use her food stamps on our product. Jillian has been working for the past year to make that happen but has been boggled down in red tape. Maybe there is an opportunity here. Maybe we can do a trade. She can be a consumer advocate, champion the cause to the government folks, maybe get the wheels moving and we can give her 3 months worth of produce. At any rate, the 12 hour day that Dan and I had did not seem to be fruitful except to meet some people from our community, which was fantastic!

Late Monday afternoon, after I finished my work from home for Jillian and Dan came home from Papayas, we made the hour drive to the west side to prepare for the Aqua Engineers Employee party at the Harbor House. As we bustled in the hot kitchen, Roxanna (who is our neighbor Phil and Simone's friend and who hired us), Greg and his wife, Clyde, and the founder of the company Ian sat under the stars, caressed by the sounds of the ocean, drank beer and filled the cool night air with laughter. When we finished we went out to say goodbye and get the keys for the next morning. They asked us to stay and have a beer with them. Being that they were all local boys and girl (except for Roxanna) I was a little nervous. Greg is gregarious, I'm guessing he's the salesman, his laugh comes easy as he entertains us with his stories. Greg has my brother's name, a sister with my name and a son named Dan. Ian, super nice in a quite kind of way, is also quick to laugh. The quite ones are Greg's wife and Clyde. I imagine they are thinking "who are these haloies, so new to our island and what are they going to take from us and/or our island". The ice breaks as Roxanna draws us into the conversation by way of our old work and the 2008 Country Music Awards. After they learn about us, I ask about them, each in turn. Ian has a rags to riches story with a stint in Viet Nam. Clyde, a minimalist with words, quietly says he was born and raised here. Greg and his wife met on Oahu where she was born and raised, they moved here 20 years ago. We have a long drive and big day ahead of us so we leave feeling inspired by their acceptance.

Tuesday morning we wake up, get dressed and are out the door in less than an hour. We stop to pick up some last minute things and breakfast. The drive doesn't seem as long today, maybe because the jeep is filled with music, the freshness of a new morning and beautiful flowers lining the highway. We are the first to arrive and get right to work. By noon everything is ready. The party starts at 2 so we grab a quick bite to eat at a local taco joint. Back at the Harbor House, Clyde, Roxanna and Greg's wife decorate and we pitch in to help. Clyde and I bond over balloons. At 2, everyone settles in for the meeting. As Dan and I sit inconspicuously in the back, I can't help but be reminded of the many corporate employee meetings we sat in. The difference is the big blue ocean behind us and the fact that this is an employee owned company. As soon as the meeting is over everyone lines up for some food. It brought joy to my heart as I, finished with cleaning and walking back to the kitchen, saw everyone sitting at the tables laughing and connecting with each other over our food. We were invited to stay, have something to eat and relax. Being that it had been a busy week and we needed a drink (no booze there) we declined. As we said our goodbyes people asked for flyers and we got invited back to do it again next year. I wanted to celebrate! Financially, it wasn't a total success. We didn't lose money but we didn't make a whole lot. We over delivered and I'm ok with that. In tearms of customer satisfaction is was a success! Here is the email I received:

Aloha Marta and Dan,
A big Mahalo to both of you from all of us here at Aqua!  The food was awesome; we had compliments from everyone and we all ate until we couldn’t eat anymore. And we still had food leftover!  The food at any of our events usually contributes to 90% of the success of our parties because we all love to eat; it’s what we do best. Thanks to both of you, our event yesterday was a huge hit.  Leaving brochures behind was a great idea; I think they all got picked up by our employees.
Thank you also for your generosity with lending a hand (or four) with the other party odds and ends.  We couldn’t have pulled off the setup without your help.
We’ll be sure to call on you again in the future and definitely recommend you to others.  Good luck to both of you with your new business and keep on cooking!
Mahalo again,
Valerie
Valerie A. Matias
Human Resources Manager
AQUA ENGINEERS, INC.
3560 Koloa Road
Kalaheo, HI  96741
Ph:  808.240.2208
Fx:  808.332.7596
www.aquaengineers.com
We drove to the Oasis, my favorite watering hole. I called Simone and asked her and Phil to meet us there, it's because of her we got the job and I wanted to buy them a round of drinks. The dogs were great, they had let them out, but could not join us. The Oasis is right on the beach. Outside, under the awning we down a mojito, order some shrimp cakes and some corn cakes and a mai tai. We feel good, tired but happy for a job well done. Between snatches of conversation reviewing the day, Dan casually says "why does that man look so familiar?" I turn around and am totally shocked. I exclaim "Oh My God!" It's Mitch and Char. My friend and maid of honor Mary's parents. I spent a lot of time at their house, when Mary lived there about 20 years ago. Char was my realtor when I bought my first property, then when Dan and I bought our house in Golden and again when we bought our home in Parker. She and Mitch moved to California 9 years ago to be close to their kids (Mary had moved to Malibu, became a successful therapist, horse trainer, author, athlete, wife and mother of triplets) and we hadn't seen them since. We caught up and made plans to get together with them Saturday (today) for lunch. They are also coming up to the farm on Tuesday, the day before they head back home.

Wednesday was harvest day. I was exhausted and because I couldn't do my normal farm work from home on Tuesday, I was rushed. We got 2 new client orders to fill (a restaurant and Hoku Whole Foods) as well as Papayas and our 35 member CSA. It was also the day my first publication ran in the newspaper! To read it click here. I didn't get credit, it was presented in the form of a press release, but still! We have gotten 4 new members from it. I invited them to the farm on Tuesday so I could give them a tour and get them signed up.

I was lucky and spent Thursday and Friday resting while Dan worked. Mmm, I can smell the Ulu, it must be done! 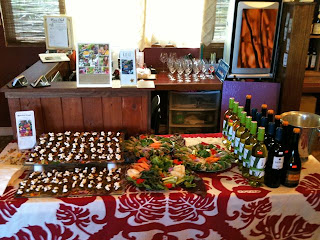 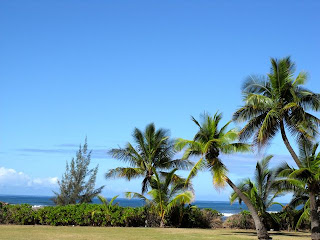 The view at the Aqua Engineers party 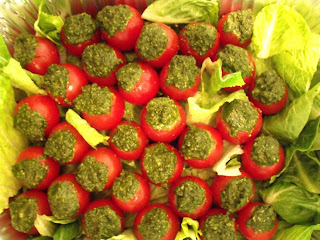 These are the Kung Fu Tomatoes (named when Jon Freeman took a bite and exclaimed "Wow! These are like Kung Fu in your mouth!") that Dan made. Cherry tomatoes filled with cilantro pesto. 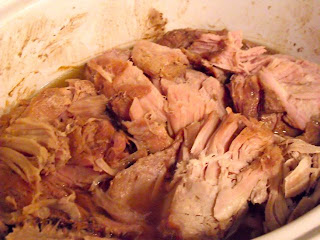 There wasn't enough kalua pork so I made some in the crock pot. 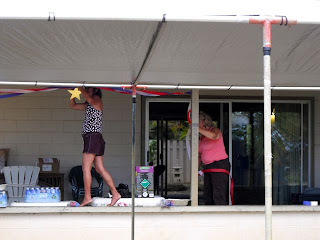 Greg's wife (brown) and Roxanna (pink) set up for the meeting 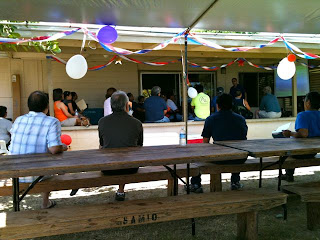 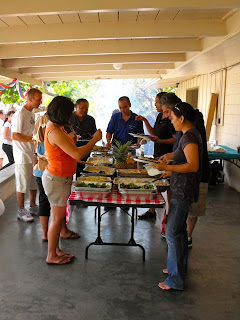 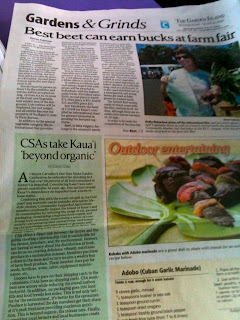 My article in The Garden Isle newspaper! 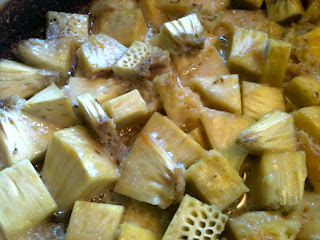 Baked Ulu ready to eat! It is very starchy, kind of sweet. Taste and texture like bread, hence it's name. Extremely filling! I can see this with countless combinations. The next one will be roasted with garlic and rosemary.
Aloha!
Posted by Aloha at 9:32 AM No comments: