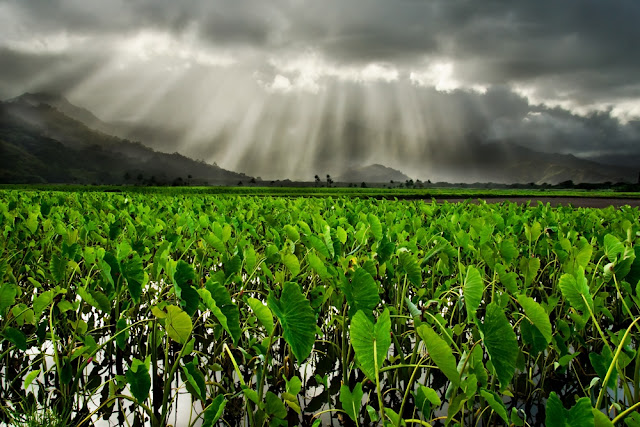 The taro fields in Hanalei (This is a Dan shot, the rest are from my phone)

I have been missing my family a lot, so I decided to make some of mom's dishes. It reminds me of her, home and my family. 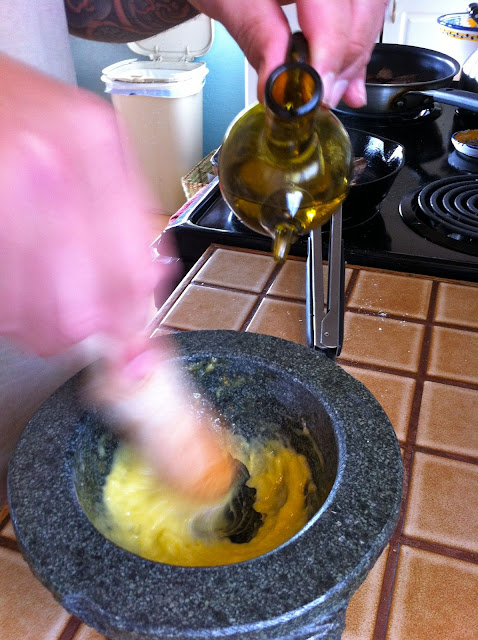 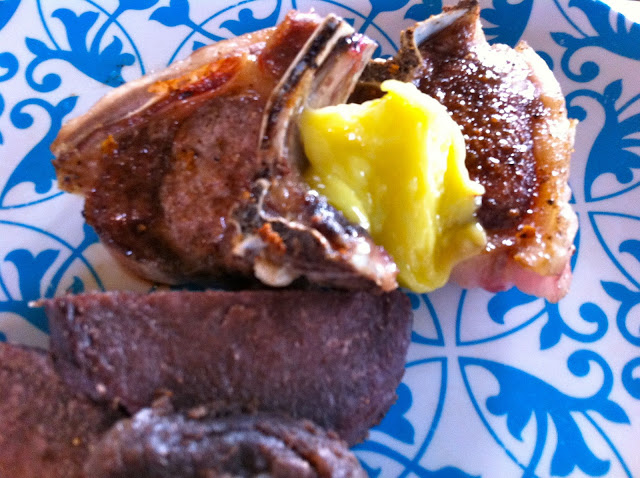 and we served it with seared Kauai lamb chops. Those purple chunks at the bottom are fried taro. 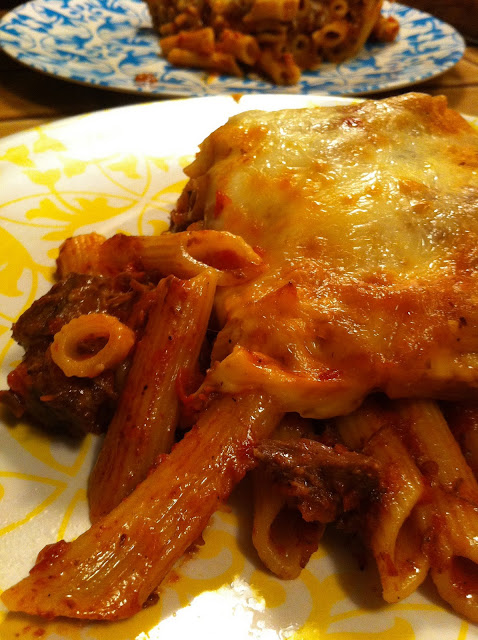 My attempt at mom's mac and cheese turned out pretty good.
Even though the skies are full of grey clouds, we are heading up to the North Shore to get some shots for Jeepstyle, and the Koloa Rum Company. It’s a horrible time of year to shoot beautiful pictures, but these clients want their shots by mid-January. 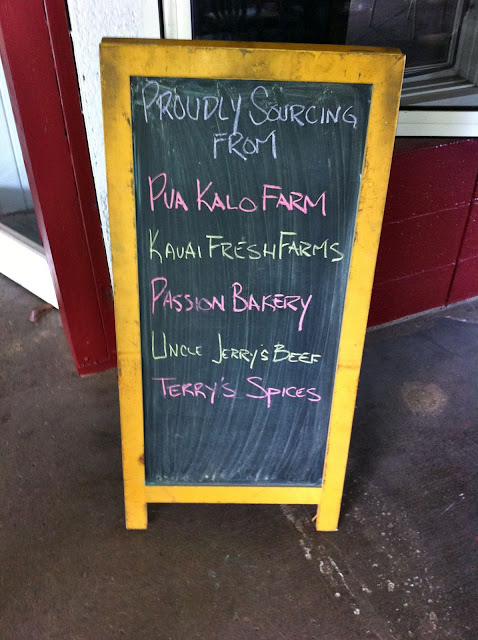 Sign outside The Feral Pig
We went to a restaurant called The Feral Pig the day before, so I spent the morning writing the article for MidWeek Kauai. Dan culled though those shots, and made them pretty. My other column, Farmers Markets, is featuring romaine lettuce, so Dan processed those as well.
By the time we were ready to head up north, it was one o’clock, and we were starving. We had done a profile on a restaurant up there, and the chef gave us coupons for two free meals. We figured we’d cash those in before they expired. 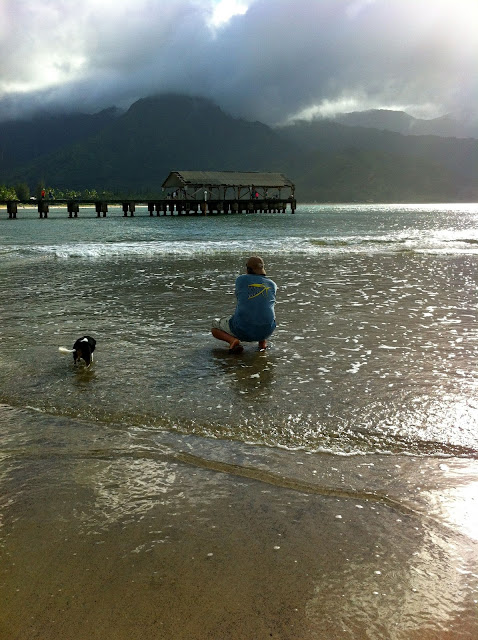 The restaurant has outside dining, and it’s situated right next to the garden that supplies the kitchen. When you’re done eating, or while you’re waiting for your food, you can take a little stroll around. The gardens are in a circular pattern, with papaya, palm and banana trees lining the permitter. Chickens roost and provide eggs, and lambs graze in the field. 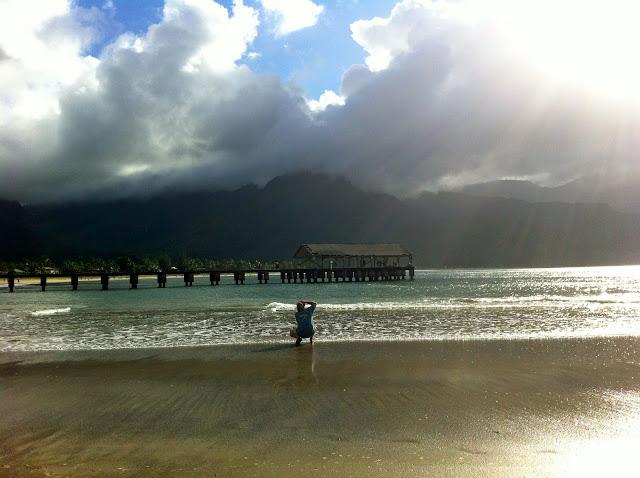 We didn’t take you there because, when you were here, the chef was horrible and a jerk as well. Chef Rodman is the new chef. He came from Oahu where he was the chef de cuisine at the Palm Terrace in Turtle Bay Resort. It was fancy-smancy, but he moved his family here for a more relaxed lifestyle. 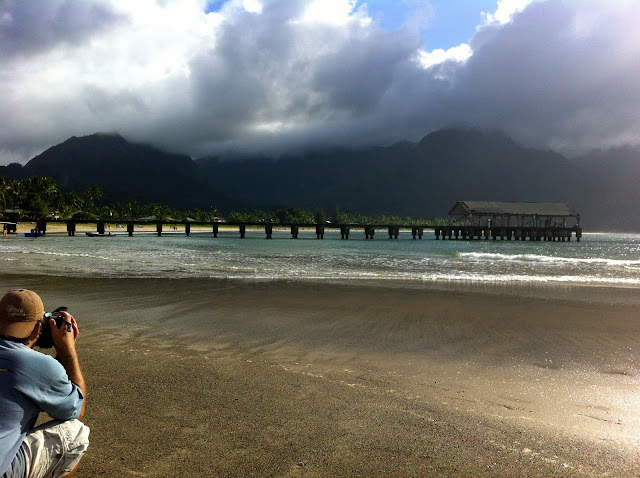 Dan ordered the hamburger made with Kauai beef, and I ordered the Asian beef tacos also made with Kauai beef. Dad, those tacos were so good! Tender ropes of beef, slow-cooked in a rich tomato sauce. It was served on two corn tortillas and topped with kale, because Rodman says, “It’s way healthier.” A spicy yogurt sauce was drizzled over the kale, and came with a side of black beans, quinoa, and fresh salsa. 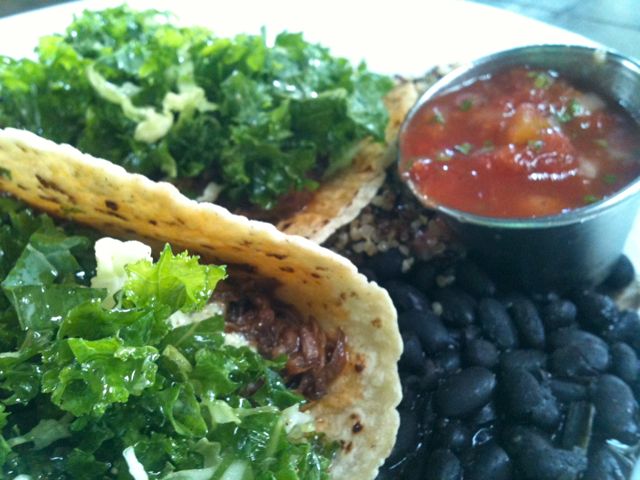 We’ve become friends with Rodman, and while we were waiting for our food, he set a plate of poke in front of us. “Here, while you’re waiting try this and let me know what you think. I’m trying it out, see how people like it. I’ve only sold six today.” 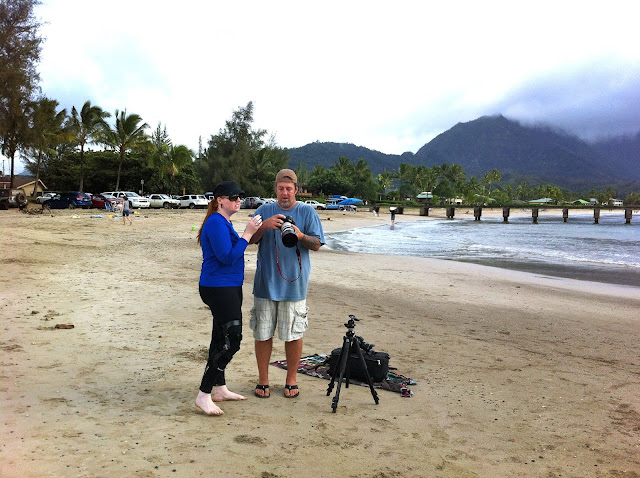 A lady saw Dan taking pictures, and asked if he could fix her camera

I know you don’t like raw fish, but it was delicious. The ahi tuna was tender, and really fresh. It melted in out mouths. There was a spicy sauce made with sriracha, a Thai hot sauce, and slivers of raw onion. 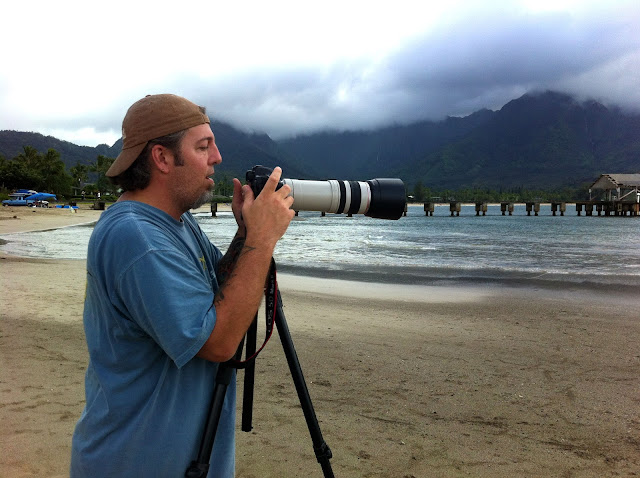 Since the light wasn't that great, he put it on his tripod to check it out. She appreciated it, and said she wants to hire him to take family portraits while they are here.

While we ate, Dan laughed and said, “Next time, we should just come in and sit down. We don’t even need to order.” I laughed too because it’s true. Last time we came, he had us try three other things on the menu, as well as two new fruit drinks. 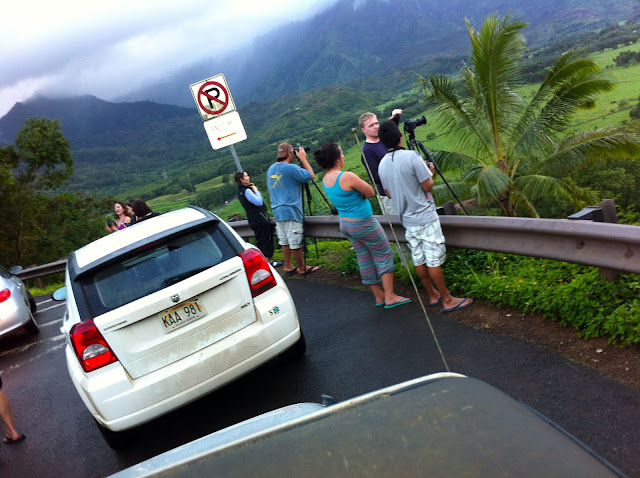 Sometimes, like today, he sits with us and fills us in on what’s cookin’. “Oh Marta! You gotta try this lamb we just got in!” he tells me, his eyes gleaming with excitement. “They’re from our fields, we hung them to dry for 14 days.”
Rodman is a gregarious local boy, around 35-years old, with dark hair and eyes, and golden skin. His lanky frame leans against the chair-back, one leg crossed over his knee, and his white T-shirt is damp with sweat.
“We took those bad boys to Medeiros this morning and they had both of them cut, ground and packaged in 25 minutes!” He smacks the back of his hand into the palm of the other to emphasize the butcher’s speed.
I ask him how the lamb is going to show up on the menu. “After Christmas, I’m going to make rack of lamb, I’m going to roast it with cinnamon and some other spices. You gotta try some of it! I’ll be right back.” He disappears into the kitchen, the screen door closing behind him with a whack!
Several months ago, the restaurant had bought some of Dan’s photos for their website, but Dan wasn’t happy with the burger shot. So he snapped about 40 shots of it while I tucked into my tacos. I learned not to wait for him, because my food gets cold.
Everyone sits on these long, wood communal tables with tops that are about three inches thick. There are eight chairs to a table. We had one to ourselves, and it was situated right in front of the kitchen door. Lucy napped under the table.
Rodman, with plated lamb patty in hand, opens the screen door with a flourish just as the actor Rob Lowe rounds the corner. They almost collide. Rob stops, looks down, and says, “What’s that?”
“A lamb patty.”
“Can I have one?”
“Sure.”
Rodman sets the lamb patty, crisscrossed with a garlicky yogurt sauce, down in front of us. “Tell me what you think,” he says, and heads off into the kitchen to make Rob’s patty.
We are full, but we devour it anyway. Rob and his family settle into the next table over. A few minutes later, Rodman slides into the chair across from me, and asks, “What do you think?” “It’s wonderful,” I say. “It tastes so clean, and it’s very juicy.”
“OK. You gotta try this cookie we made with fresh peppermint leaves.”