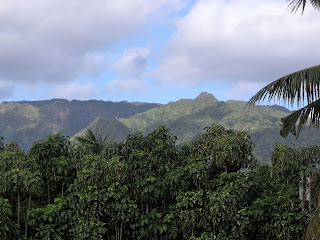 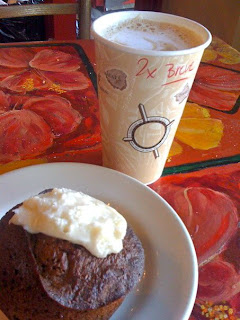 Breakfast at Java Kai (carrot cake muffin with coconut frosting)
Since our cargo has come in, the last few days have been a blur of unpacking and shopping. Saturday, after we skyped with mom for her birthday, we got a moped. Dan read an article in The Garden Island newspaper about them, with a gallon tank that lasts 100 miles, we thought it'd be a great second vehicle for around town. We went to Motorcycles Period where Tom, the owner spent an hour with us going over the moped's benefits. Out the door for $1500.00, a price we could not argue with since the 09's usually go for $1800.00 before taxes and other things are added in. We were told that it would take a couple of hours to charge the battery and get it ready for the road.  We headed over to the Kauai Community College farmers market and then into Poipu to Living Foods Market, a place that Tom, who is also a foodie, recommended. In an upscale outdoor mall, it's kind of like the Tony's Market in Colorado. We ate lunch there, outside with the dogs, on the promenade. The dogs have been really clingy since we got here and really don't like staying home, even if that means riding around in a car all day. We still had some time so we took them to the beach to burn off some energy. There was a monk seal cornered off, they can get violent if people get too close. Baxter ran up and down the beach barking until we played fetch with him, that being the only way to get him to shut up. Lucy got right into the water, she is no scardy dog now! Wet and sandy, we picked up the moped and Dan drove it the 45 minutes home while I followed him. 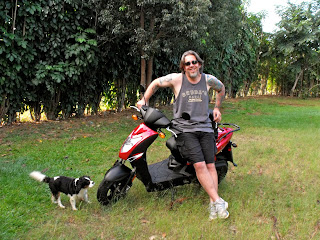 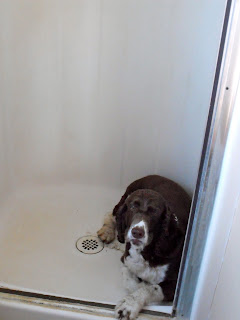 Baxter waiting in the shower to get his muddy feet cleaned
Yesterday, I got the kitchen organized and we bought a lot of shelves and stuff at Costco, Kmart and Home Depot. Today, when we are finished unpacking and organizing, I'll take pictures and post them. It's turning out quite nice, it's great having a husband who not only knows how to do home improvements but who likes to do them! I think we can stay here for a long while. 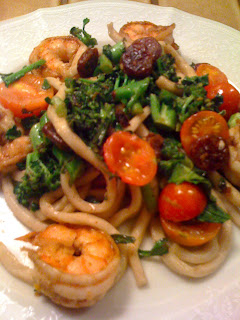 Now I can cook! Fresh udon noodles with shrimp, japanese sausage, broccoli, cherry tomatoes and garlic.
Tomorrow is my birthday and we are going to learn how to surf!
Posted by Aloha at 10:31 AM 2 comments: