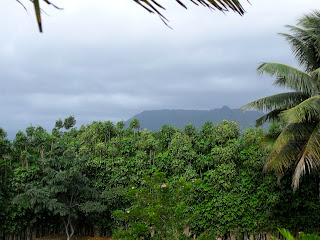 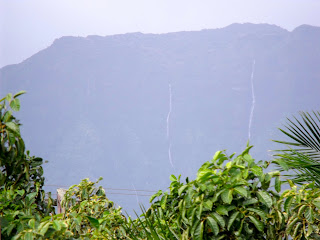 It has been raining on and off all night, looks like Mt Wai'ale'ale (the top is the rainiest place on earth) got tons. We looked through the binoculars and saw 5 falls gushing water, here you can see 3, the one on the left continues down, the phone lines crossing over it.
Trying to surf Thursday left us recovering on Friday. We spent most of the day relaxing, when the day really started to heat up, we went to the beach. 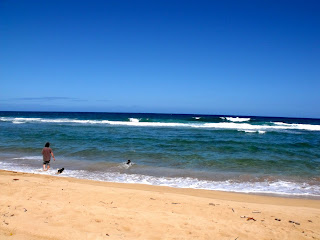 The waves were huge, cresting in the distance (about 100 yards out) are 10 foot waves. They also broke on shore at a good 3 feet. 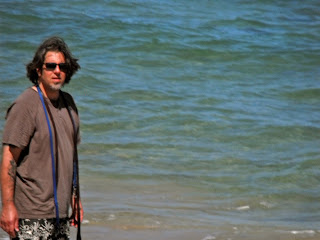 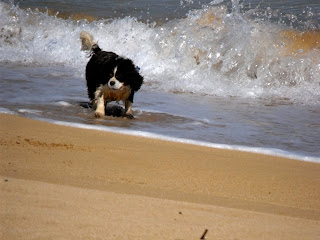 Lucy is not afraid of the waves. She used to run to safety but now she just stands there and braces herself. 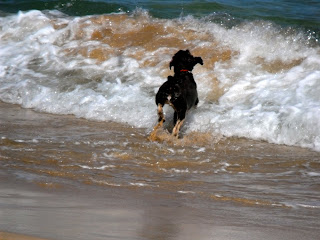 Baxter, undaunted but the surf, goes after his stick 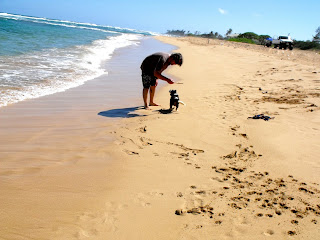 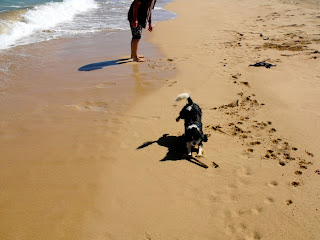 If you look close you can she she is just about ready to pounce on her stick, her back legs are in the air. 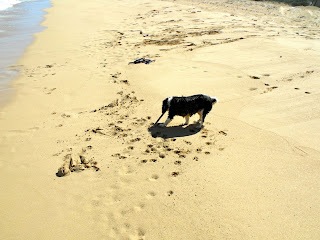 Then, she would chew on the stick 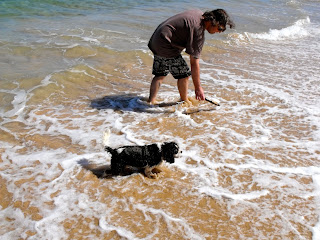 Sometimes she would fetch her stick in the shallow water 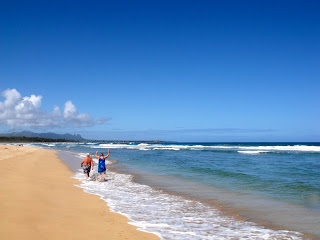 This picture made me laugh. I was trying to get a shot of the beach, ocean and Bali Hai. The people looked small and distant in my view finder. When I got home, I realized she just got slammed by a large wave and I caught the moment! 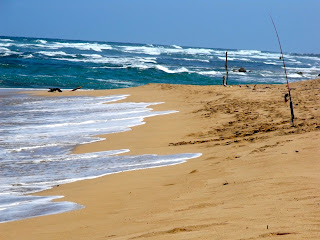 People had their fishing poles out 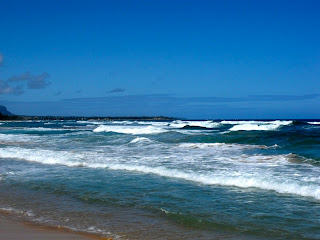 A lot of surf that day! 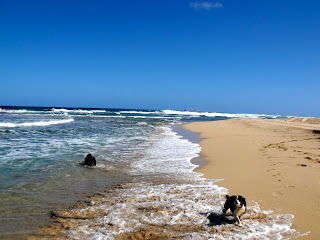 Lucy just loves the beach more than anything else. She runs up and down in a puppy frenzy, runs up to meet people, tries to take the stick from Baxter and is now playing fetch, the Lucy way. 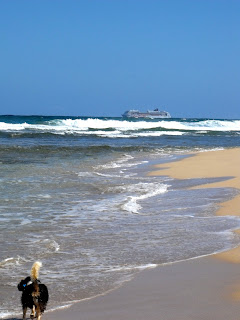 I think she's checking out that cruise ship 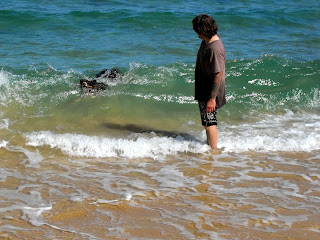 Baxter surfing the big wave in. At one point he was distracted and got pummeled by a huge wave, sending him end over end in the water. He was apprehensive after that but didn't want to stop. 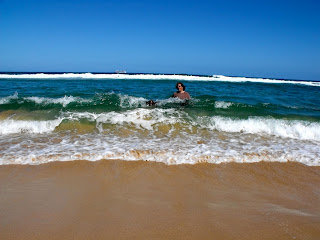 So, Dan went in with him. Here 2 feet from shore, they get hit by a good one. 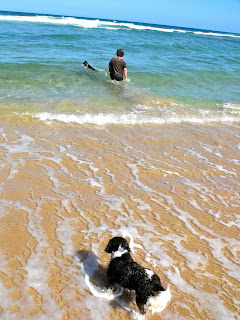 Lucy was watching very intently, I couldn't distract her when they were in the water. 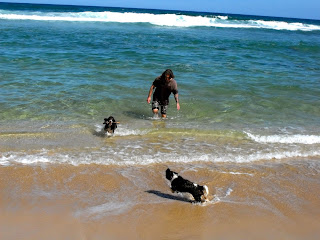 Then she would run up and try to take the stick from Baxter. 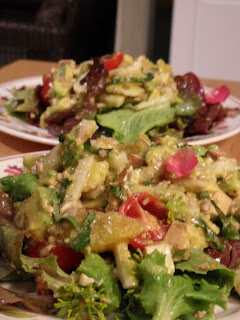 Dinner that night. Organic mixed baby greens with herbs and edible flowers, oranges, cherry tomatoes, avocado, marinated tofu and sunflower seeds. We watched the movie Management and made some popcorn. Management is a good romantic comedy with Jennifer Aniston and Steve Zahn.
Saturday. 6am, pitch dark. An emergency siren yanks us from a deep, peaceful sleep. Heart pounding and mind whirling, we remember the news story last night. A possible tsunami was predicted to hit the Big Island (also called Hawaii) at 11:19am. We throw on some clothes, ignore morning hygiene, and turn on the TV. Immediately the severity of the situation sets in. A devastating earthquake in Chili yesterday, registering 8.8, had the whole pacific rim on stand by. Phil, our neighbor, came up and said the stores were crazy and Safeway was out of water. Kauai was predicted to be hit at around noon and roads were closing access below evacuation level at 9:30. It was 7:30, so we headed up to our grocery store, (because they pride themselves on the freshness of their fish and Angela - at the bank - recommended them) Foodland. The roads were populated, but traffic moved swiftly, everyone driving about 15 to 20 MPH over. It doesn't sound like much but when the one lane, winding mountain road's speed limit, is 25 MPH, it is. We passed the Kapa'a Middle School, which is also the emergency evacuation shelter. The parking lot was full of cop cars, emergency vehicles, tourists and locals who live below evacuation levels. 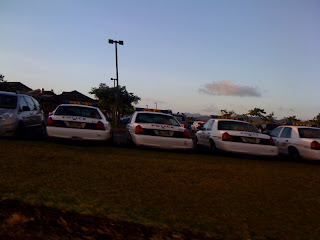 Drive by shot of Kapa'a Middle School taken from my iPhone.
The Foodland parking lot was full, but we quickly found a spot. Walking into the store, streams of people were coming out, their carts full of groceries and bottled water. Some, tourists, had all of their luggage crammed in the back of their cars. Dan and I, just having gotten groceries, didn't need much. We got emergency candles, tequila, limes, water, m&m's, pastries, cream (for my coffee), paper towels, and kleenex. We also broke down and got a pack of smokes. 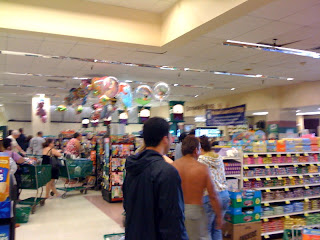 Foodland. Everyone was very calm, civilized, and even made jokes. Standing in line we hear the two gas stations in town, Shell and Conoco are out of gas. 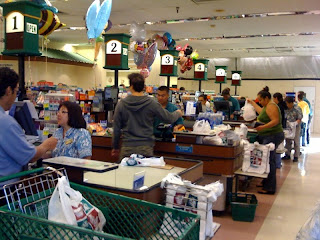 Our cashier, in lane 1, had been working at at steady pace since 6am. Foodland was going to let everyone go at 10am so they could get to safety and family. 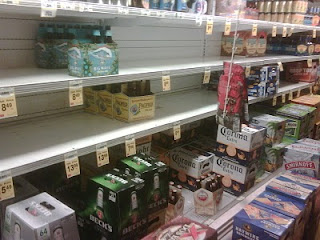 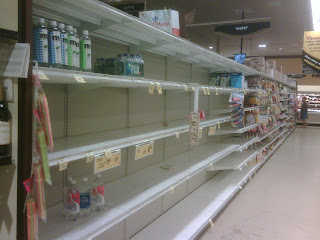 Water isle in Safeway
Back home in less than an hour, we were glued to the TV. We also had our laptops open checking twitter and posting updates on facebook. A facebook friend on Oahu suggested we get on twitter because it's big on the islands and a great way to connect with people in Kauai. She was right, luckily we had "networked" several days before and accumulated a lot of Kauai residents as "friends". All day, we kept getting tweets and links from all over the islands, we posted that we had room, high in hills of Kapa'a, if someone needed a safe place to evacuate to. I also had the local NBC news website open. Family and friends, bookmark this site, this is the site to check from afar for accurate and updated information. We sat there, high on adrenaline, for about 5 hours. Eating pastries, drinking coffee, and actually thinking we may be able to see a live tsunami from the safety and comfort of our treehouse, like everyone else. Governor Linda Lingle, spoke from the emergency shelter in Oahu. I felt comforted when she talked about the extensive experience Kauai has in emergency preparedness (hurricane Iniki being an excellent teacher) and happy that they had had enough warning to make sure everyone was safe. I am sure everyone in the state was watching, eating and drinking. The entire neighborhood was silent, except for the birds. One tweet said they sold out of spam in Maui, others gave links to live video streams, most said everyone was safe and watching for the big event. The tsunami was expected to hit Hilo on the Big Island, then Maui, Oahu, and Kauai last. We watched the water rise and fall in Hilo bay, under Kai Bridge (it runs over the estuary) there was so much water being taken from the river and into the ocean, it actually created white water. Then, 2 minutes later, the current would show water moving into the river. The scientists at The Pacific Tsunami Center, located in Oahu (created as a result of the the 2004 Indonesian tsunami), gave regular reports. We were in awe at the professional manner in which the state responded to the situation. Everything was well communicated and organized, updated information sent to the news stations on a regular basis. The reporters were not dramatic, neither were they silly or stupid, but very professional. No panic, no looting. We were amazed by the cooperation of the residents, we saw deserted streets and boats heading out from harbor to a safe distance. I am proud of my new home state and I have never experienced something so intense, not even tornado warnings in Colorado. There was one tornado in Parker, that looked like it was headed right to our house, but that only lasted 10 or 15 minutes, this was needles and pins for most of the day. Thankfully, it was a small tsunami only causing damage to ocean life by washing fish on shore or exposing reefs. A perfect dress rehearsal. 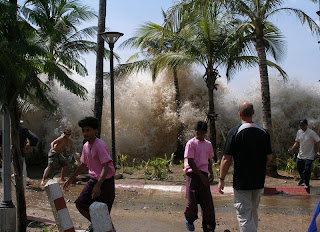 2004 Tsunami victims had no warning 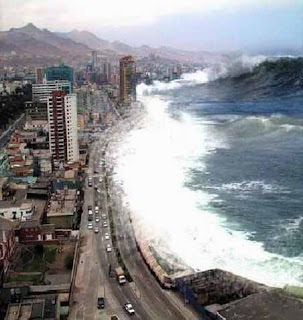 I apologize for the quality of these pictures, I took them from the NBC website, you can't see the detail and beauty but you get the gist of it. If you want to see more, clearer pics, click here. On this link there is a picture of an exposed reef on the Na Pali Coast, pretty scary since these waters probably have about 30 feet of water covering them normally.

Hilo Bay, Bridge Kai. You can see how strong the current was, and how stupid some people were!

We watched in disbelief as the local NBC station showed this shot in Honolulu. A man (highlighted in the circle) was walking out into the ocean as the tsunami approached the Big Island. He is now known as the village idiot.

Deserted harbor in Lahaina.
At 2pm, the warning was released. We were advised to stay out of the water for the next several days. After it hits Japan, it will rebound back. That combined with the 50 plus aftershocks in Chile, creates deadly rip currents. Of course there were people surfing in Honolulu, 30 minutes before the warning was released. Stores, restaurants and bars opened up and Simone got called into work. We decided to join her and Phil. We needed a drink and some camaraderie, to relieve the stress from that day. It was fantastic, they know a lot of people and introduced us to them. Some of their friends, Alan and Roxanna, were going to Alan's house to play pool. Another, Gary, was having a BBQ, we were invited to both. Tradewinds does not have a restaurant, but they call orders in and have them delivered. We ordered fish wraps from the Fish Hut and had our favorite lilikoi margaritas. Simone got off at 8 and we all decided to go over to Alan's. She and Phil went to the store while we went home to put on warmer clothes (a wind advisory was out) and get the dogs. Simone, a friend who already knows me pretty well, said we could bring them to Alan's.
We hear the crunch of their tires on the gravel and head downstairs. Phil tells us Alan passed out (it was his birthday today, birthday+tsunami=heavy drinking) so we decide to sit outside, under the full moon and have a couple of beers. We sat out until one am getting to know each other better, only the rain driving us to bed.
Since the weather is kind of poopy and we woke up at 8, we are not feeling too motivated. The only thing scheduled for today, is making food. Shakes and miso tea for breakfast, fried rice cakes from the leftover pallea for lunch, and a salad for dinner. 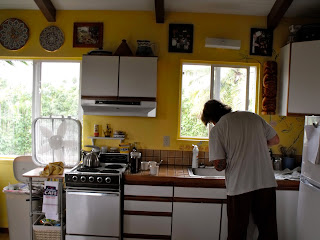 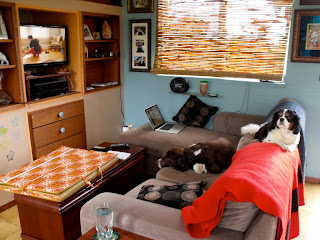 Set up for a day of relaxation 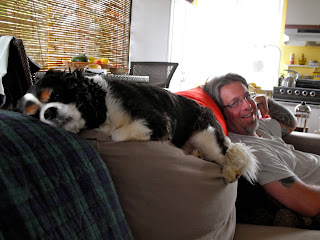 Lucy's favorite place to relax, which is cute, except when she snores right in my ear!