I'm sitting here in our treehouse, watching the sun slowly come up. Dan and I are having our morning cup of coffee and enjoying the cool morning air. It's mid June and it's getting really hot, especially up here in the treehouse. As I sit here I can't help but reflect, we've only been here 4 1/2 months! We have come so far in such a short amount of time!

Dan's co-worker Jessica said making it past 3 months is a landmark. Who knew? When we left Colorado I fantasized about checking out every inch of mountain and ocean that I could. That was the first thing on my agenda. After a month I found I really needed work, at the very least someplace regular to go to. The school fit that bill and so much more. Dan and I both got jobs from taking the class. We've made friends and it seems they're going to be meaningful friendships. We've become local. The other day I went to Papaya's to drop off the farm's produce for Dan. He was somewhere in the store so I stopped to talk with Puamana. She is a lovely, young native. Sweet, mellow, open. She said "your from here yea"? Everything ends in "yea"? I am flattered, a native thinks I am one too!

Phil and Simone, our fantastic neighbors, come over when we are gone all day to let the dogs out. Playing fetch with Baxter and setting up Lucy like she was a queen. Normally when I come home, they start barking like crazy. I had taken Baxter to the farm with me because between our anniversary, the Taste of Hawaii and working all day Monday he'd been pent up for too long. Lucy was home alone, she can't be trusted because she doesn't listen and follows her nose with no concern for where she is going or who is calling her. I pull into our "garage" and Simone calls out. She and Phil are sitting under their covered patio, sipping some beer and trying to cool off. They had Lucy set up in her own chair, complete with a big, fluffy pillow! She was so content she didn't even notice I came home until I spoke. Anyway, we're fitting right in, employed in such a way that we can pay our monthly bills, making good friends and not working full time.

I couldn't have dreamed this when I was dreaming about coming here. My dreams were open, general. I knew I wanted to make meaningful connections with people, be creative, work for myself, enjoy paradise, make good money, be in nature, be relaxed and happy. In 4 months that is happening on a larger scale than I could have imagined!

Dan is a trusted and valued member at Papaya's. They are enjoying him so much, his hours are increasing as are his responsibilities. He is averaging 25-30 hours a week. That says a lot in Hawaii where most people work part time, under 20 hours, so the business doesn't have the heavy cost of $350.00 per person for health insurance. If you work over 20 hours a week state law says they have to provide health insurance. He is helping open the store, making signs for inside and outside of the store (including creating the art work), ordering produce for the cafe, being consulted in major decisions, fixing things, and he is going to help install a new point of sale computer system, flush it out and teach it to everyone else. In addition to managing 2 people, getting more local produce in the store and trying to keep the coolers filled. It seems word is getting out, Papaya's has more local produce and better prices, he is selling out of produce like crazy!

Jillian really trusts me and pretty much gives me free reign to manage her CSA as I see fit. As a result I am designing flyers and posters, writing newspaper articles (one for the Garden Isle and one for Kauai People), I am going to write an article for one of my favorite publications Edible Hawaiian Islands. In an effort to increase members for the summer season I teamed up with Da Kine Wine. Tomorrow we are doing a free organic wine tasting. I, as Kauaian Fresh will make the food and as the CSA manager will try to get some new members. The menu is crudités of beans, cabbage, baby carrots, broccoli, celery, kohlrabi, baby turnips and radish. Crostini with basil, macadamia nut pesto topped with goat cheese.


Spring Rolls with carrots, micro greens, napa cabbage, scallions, cilantro, mint, thai basil and butter lettuce. All made with produce from the farm! It's so cool to have 4, 4000SF gardens as my palette.

As the representative for the CSA I deal directly with the members (underwater ocean videographers, business owners, radio talent among them) and am meeting people, developing relationships. I am working directly with chefs of high end  restaurants (ones that I thought of waitressing at!) to provide specialty produce. Tuesday, is my catering gig for 50 people. A lot going on right now, once next Thursday rolls around things will mellow out until Jillian leaves for vacation in July.

So, we are finding our flow. Soon, my fantasies of checking out every inch of this beautiful island will come to fruition. Maybe in August, once Jillian gets back, summer season will be well on it's way, Dan's hours at Papaya's will even out and become more predictable. Those will be some posts you won't want to miss, everywhere I look astonishing, vast beauty surrounds me. In the mean time, in an effort to not bore you with our day to day stuff, I probably won't be posting as often. I considered stopping the blog but since you have been so supportive and following our dreams with us, I thought at the very least I could post some of that beauty for you! I do have some pictures from the Taste of Hawaii, not as cool but fun. 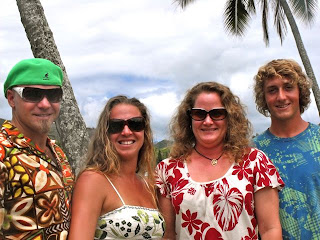 Before we head in to sample 50 different food vendors and 15 beverage vendors Gary, Jillian, me and Stew pose while Dan snaps a shot. 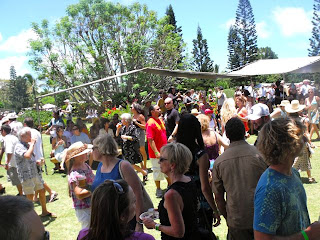 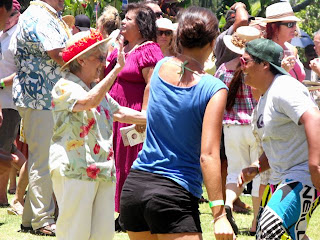 and danced to live music 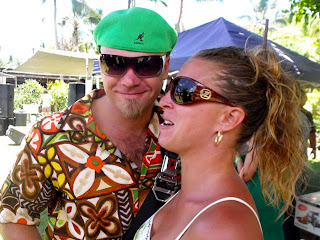 Jillian and Gary had a lot of fun, as usual. 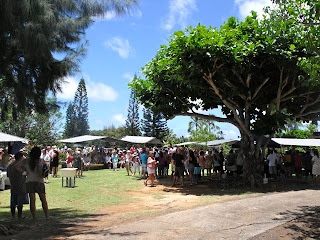 It was hot so everyone gravitated to the shade. 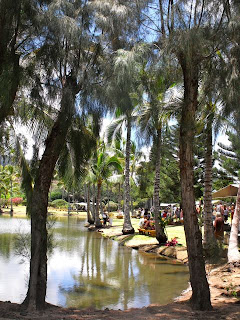 ponds sprinkled throughout the property 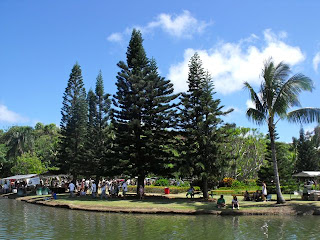 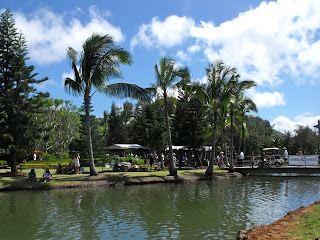 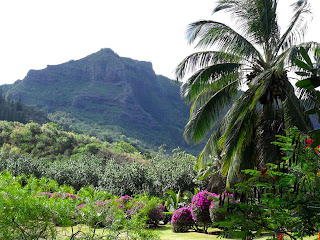 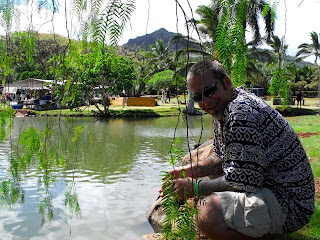 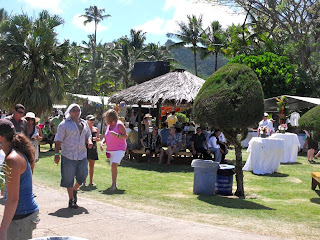 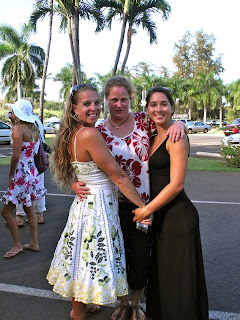 After. Jeez I'm buzzed! That's Natalia on the right, my friend and massage therapist. 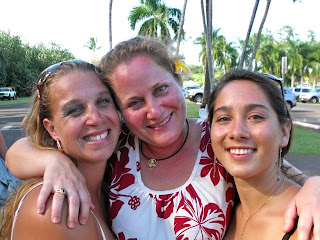 Now that's a better shot. I'm not sunburned though. I just turn really red when I am hot!! Jillian 34, me 44, Natalia 21, ah to be the oldest in a group and be dealing with hot flashes! Oh well, could be worse! 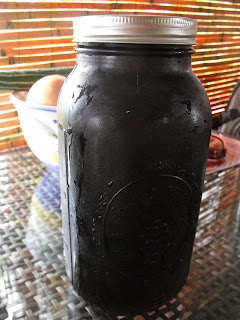 Dan had brought home a bunch of lemons, oranges and limes so I made 2 quarts of sangria for after the taste and before the after party!
Posted by Aloha at 8:08 AM 4 comments: