A Whale of a Great Week

This week started out with several interviews with Kona coffee farmers. I am writing an article based on the 10% Hawaii blending law that will run next month. A deceptive law that allows coffee sellers to prominently display the Kona name if the coffee has at least 10% Kona coffee beans. It's an example of consumer fraud and a perfect case for truth in labeling. How something that is 1/16th real Kona coffee can be called Kona is beyond me. Farmers have been fighting this war for 19 years, their cries falling on deaf State ears. I have an in with the new Governor of Hawaii, given to me by the president of the Kona Coffee Farmers Association, we'll see if they want to talk!  Right now, Kona is dealing with a crop devastating pest and this month, I have written an update here.

I got to do two fun restaurant reviews. One was for a Tapas place in Poipu and the other was a favorite place of mine because you can dine ocean side. For some reason, MidWeek keeps making the photos really yellow. I've added some shots of Josseline's that Dan sent in with his original color work so you can compare the shots. It's ridiculous, he's about ready to tell them not to print his name!

Other than writing, I have been reading about writing or reading the New Yorker magazine. They have excellent writers so I'm hoping to learn from the experts! I'm getting closer to spreading my wings and will look for more writing work soon. I plan on submitting articles to Yoga Journal, Islands Magazine, and several coffee magazines. Tomorrow, I am submitting sample articles the editor at MidWeek for a new column I want to do, wish me luck!
Dan is still plugging away at Papayas and hoping to transition out of there sooner than later. It was raining this morning so I dropped him off at work and went to do laundry. When I picked him up, he shared his dramatic morning. A lady collapsed in the peaking lot and an ambulance came to pick her up, he doesn't know if she was alive or not. Later, a homeless guy came wandering in one hour before they were open. He wanted to buy some things using EBT (electronic food stamps) but Dan told him they were closed. The guy got angry, started cussing and Dan asked him to leave. He refused so Dan had to physically escort him out.
The highlight of our week was a whale watching trip. In October, we took mom and dad on a sunset dinner cruise of the Na Pali. They have excellent food on the cruise and I got to do a review on them! I am still amazed that I get paid to eat well (and for free) and write about it. In my wildest dreams I would have never dreamed this!
On the fun side, I have walked the dogs twice this week at the beach and once at the dog park by our house and I get my yoga in most mornings. The coffee farmer I write for bought Dan and I tickets (45 bucks each) to the Poipu Rotary Club Fundraiser. A wine tasting with food from 12 island restaurants and live music. The event took place at the Kilohana Plantation. They do train ride tours of the farm, have a restaurant that only cooks from their garden (well they buy meat) so the menu is never the same and the Koloa Rum Company is there. The room was open air and about 200 people showed up. Dan and I had a great time trying the different wines and sampling the food, we even knew several people there! 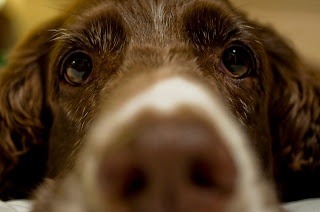 Dan had fun playing with his new lens and taking shots of Baxter and Lucy. 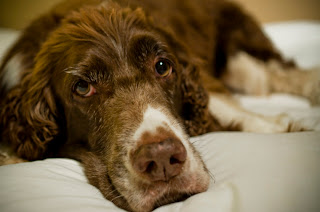 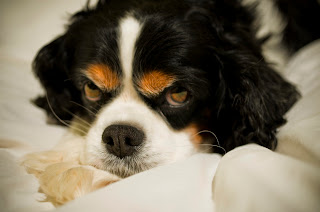 Mom and dad mailed our down comforter about 4 weeks ago. When we finally got it, Lucy had to cuddle up in it! 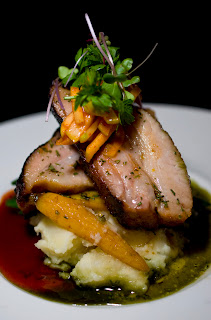 This looks way better than the one on the web site. 36 Hour Braised Pork Belly-Yum! It just looks like something I want to eat, the one in the article doesn't. In fact, I can't even tell what it is in the article! 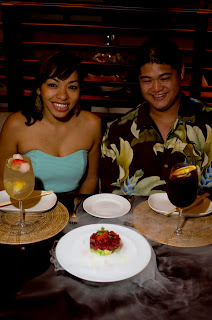 The sangria is awesome! I had the lychee - on the left. Dan had the Pom on the right. They serve it in huge glasses. One glass lasted us all night. These guys were posing for the shot. Chef puts the Deconstructed Ahi roll on top of dry ice, you can see the smoke. 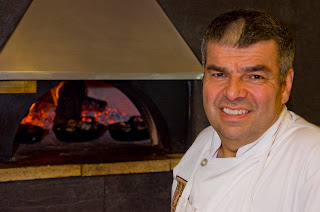 The chef, Jean Marie Josselin, in front of his Kiawe wood oven. 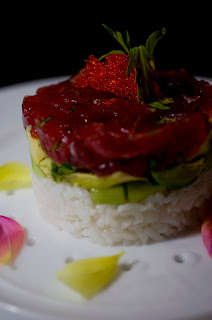 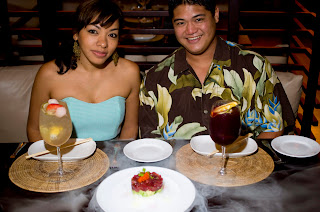 Another shot with our models and the steamy Ahi 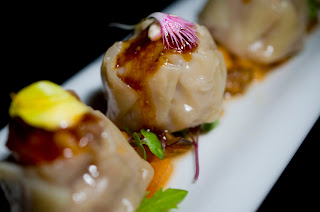 Steamed dumplings made with Kaua`i shrimp 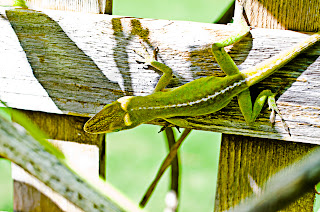 An anole, or mo`o at the botanic gardens in Kilauea 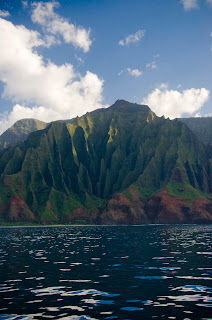 Our sunset dinner cruise. The Na Pali looks splendid due to the rains we have been getting. 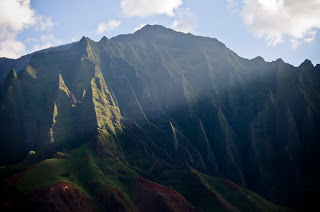 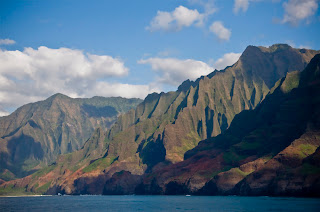 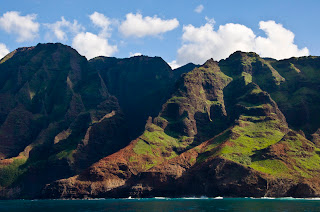 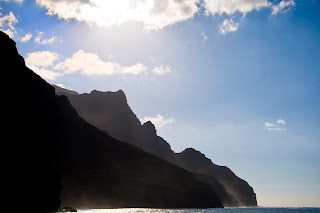 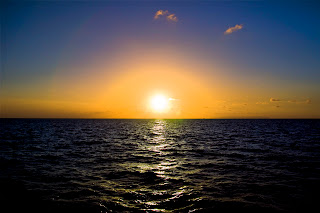 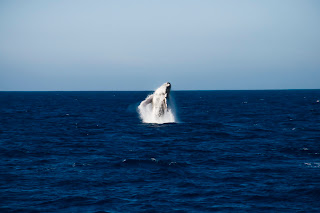 Unbelievable! We saw between 50 and 60 whales. Dan lucked out and got a great shot of this breach. 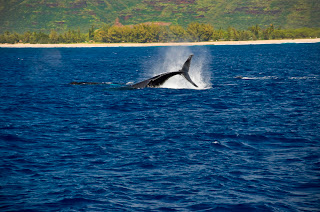 and tail. They even put a hydrophone in the water so we could hear them. 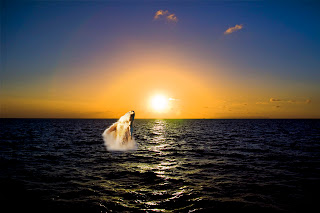 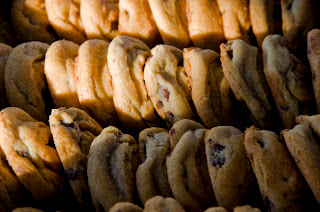 Blue Dolphin Charters  uses Grinds Cafe in Ele`ele to make their food. These chewy chocolate chip cookies are made exclusively for them and totally addicting! 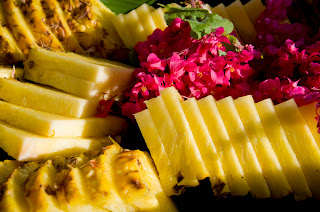 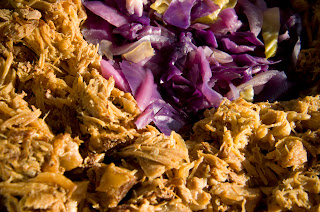 Kalua pork, Yum!! They also served teriyaki chicken, poi, steamed rice and a caesar salad. Plus, all the beer, wine and Mai Tais you can drink! Excellent!
Posted by Aloha at 1:45 PM