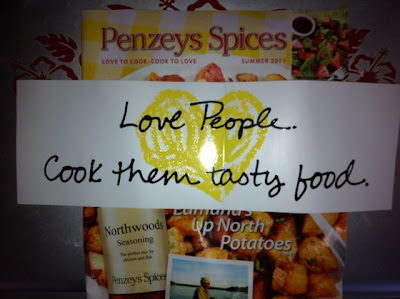 A recent Facebook post inspired some passionate comments, and since I know a little about the subject, I thought I’d write about it. Someone in Colorado posted about how frustrated they were that local cherries cost so much at the farmers market. 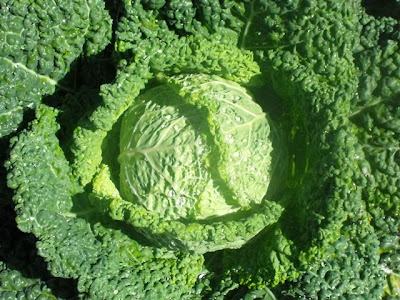 Quality food, food that has been grown sustainably, food that is homemade, food that is shared with family and friends, has been my passion for fifteen years. This comment got me thinking about why Americans don’t like food. You’d think we did with America’s obese population and diet related illnesses.
But food, real food? No. We like fast food, processed food, a lot of food, food that doesn’t cost much. After all, we need the newest computer, phone, TV . . . you fill in the blank. We like fat-free food, even though it makes us fatter. We don’t like to cook. We don’t have the time. We really don’t want to give food a second thought. Most of us wouldn’t know what to do with a turnip if we got it for free! Probably wouldn’t want it either! But turnips are delicious if cooked right, and are healthy for you as well as the soil it grows in. 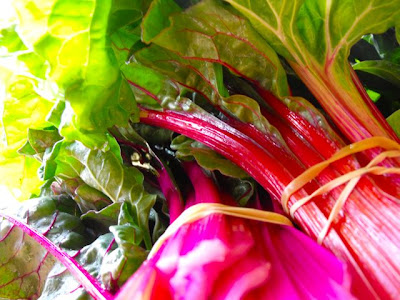 And why do we think we need so much meat in out daily diets? I used to think I needed meat at every meal! I have come to realize it’s the beef, pork, chicken and dairy associations, that have massive lobbying power, and whose farmers get subsidized, that make their way into our schools. So, from a very young age we are taught that we need it, and a lot of it. But, we don’t. The Asian population is an excellent example of healthy people who eat very little meat. I don’t think that they have ever created a cheese! Have they?
Diet related diseases are a “rich” man’s problem. Countries with affluent citizens suffer more from preventable diseases than third world countries, who have their backyard gardens and can’t afford meat.
When I had disposable income, I bought local and I bought organic. I was frustrated that processed food (anything that does not come directly from the ground, ocean, sky or a chicken’s va-jay-jay, especially things that come with lots of packaging and shelf life) was so much cheaper than fruits and vegetables. But, I didn’t feel it because I could afford to buy my organic products. 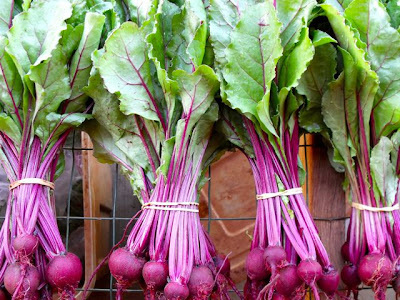 Right now, my income is significantly less and I have felt the frustration of how cheap and easily accessible processed food is. I mean, for ten bucks you can “feed” a family of four at Taco Bell. Never mind that the ingredients are high calorie and of poor quality, creating the perfect environment for disease: obesity, diabetes, heart attacks, high cholesterol, high blood pressure and arthritis, to name a few. Many of these ingredients are man-made fillers that are unrecognizable to our body. This causes malnutrition and leaves our body craving something it can use.
When I moved here, I wanted to continue buying organic, but our health food store charged way more than I could afford. The fact that most of their produce is shipped here, added to the cost. 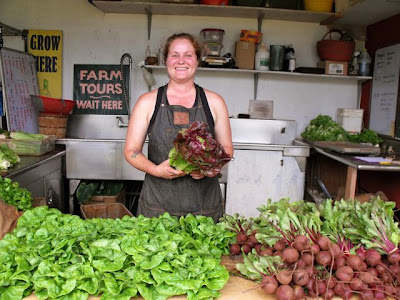 Managing the Kauai Farmers Co-op CSA
Food found me anyway, and with very little effort became a source of income. I wanted to join a CSA (Community Supported Agriculture) because I like supporting small, family farms and because I wouldn’t have to worry about buying veggies for six months. Dan and I ended up talking a 12-week course on organic farming from, Jillian Seals, the farmer of the CSA. 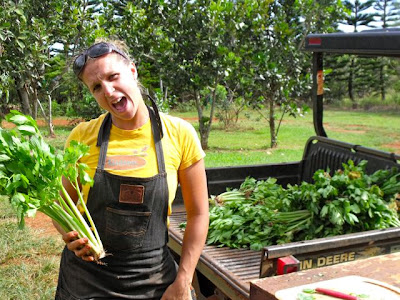 I love this picture of my teacher Jillian Seals, she is passionate about farming and in this picture she is stoked about the celery that took a long time and a lot of care to grow.
Then, Dan got a job at the health food store I mentioned above. Now, I write two weekly columns for the local paper. One profiles restaurants and food vendors. These vendors include a lady who makes jam, another who makes mead and a man who grows and makes chocolate—all use local produce. My other column profiles local farmers, something they grow—like avocados—the season, a recipe, how to buy and store, health benefits, and which grocery stores, farmers markets and restaurants sell or use their produce. 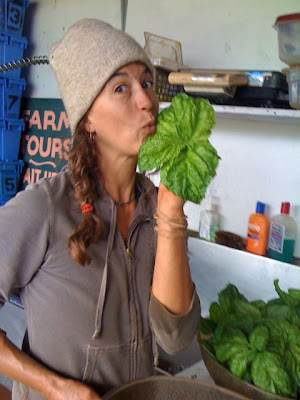 Elieen, the Field Manager at Kauapea Farms, loves produce almost as much as she does people.
I have a relationship with one of the farmers Dan used to buy from. He sells me a week’s worth of produce at wholesale price, the same price the stores get, almost the same price he sells them at the farmers market. He adds extra because he has to spend his day loading the truck and selling his produce at market. I pay him weekly as, opposed to one large payment for a CSA. For $14.00, I get a box bursting with just harvested organic produce that lasts all week. 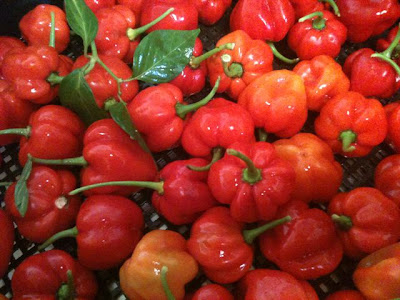 Every week I interview farmers who work from sun up to sun down planting, weeding, harvesting and selling their food. They hardly make any money at it. It’s truly something they do for passion and not income, and they struggle to make ends meet. Sometimes, things like cherries are expensive because they take longer to grow, are difficult to harvest, and require a lot of care.
Big companies care about profit, so they buy as cheaply as possible and they have the money to buy in bulk. They buy from third world countries, because it costs less for them to have the produce shipped. Laborers who harvest this produce don’t get paid a livable wage and if it’s not organic, face health problems from being in constant contact with pesticides and chemical fertilizers.
It’s cheaper to carelessly dump toxic fertilizers and pesticides into our land, rivers and oceans. Corporate farms mono crop. This means they only grow one thing. There is no diversity. Acres of broccoli require fertilizers to feed them and pesticides to protect them. 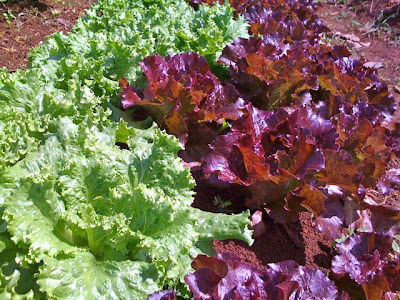 At a diversified farm, broccoli grows next to tomatoes, peppers, cabbage, radish and so on. This diversity not only protects the farmer incase one of these crops fail, but makes the plants stronger.

Sustainable simply means giving as much as you take. If you take, take, take from the environment, eventually the land won’t support you even when you pump feeble plants full of fertilizer and pesticides.

Organic farmers strive to create bio-diversity. This means a whole “city” of bugs living in the soil. Worms keep the soil loose and add nutrients via their waste. One of the best forms of compost is worm compost. Other bugs, like wasps, eat harmful bugs. Some, like bees, pollinate. There is a whole, fragile ecosystem that works together, creating a circle of life that supports itself at each stage. 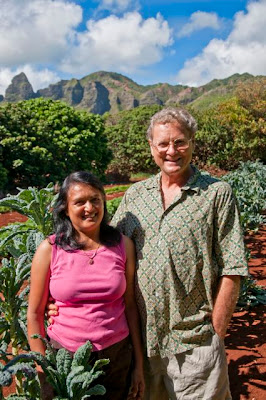 When soil has been depleted of the necessary nutrients (that transfer to you when you eat them) for plants to thrive, the system breaks down, and crops die. 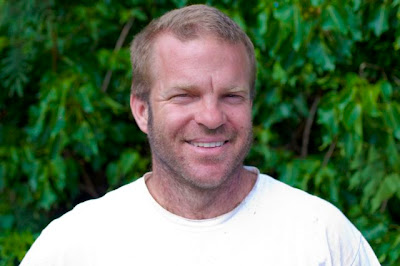 Exotic fruit grower Brad Smith
Farmers work hard, organic farmers work harder. Organic farmers make their own compost, hand till, hand plant, hand weed and hand harvest. Some even save their own seeds to use next season. They create their own fertilizers using natural materials like bird feathers, known as feather meal, designed specifically to nourish the patch of soil they grow on. Healthy soil means healthy plants. Plants that have the strength to naturally fight off pests. 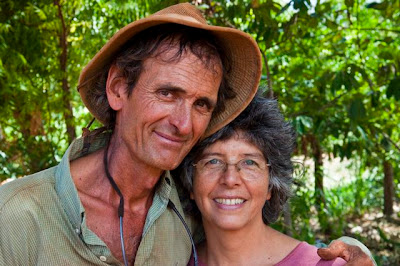 Ned and Marta of Moloa`a Organica`a

Many of the farmers I interview grow using organic techniques, but are not certified organic. The word organic has become a marketing buzz word since corporations latched onto the bandwagon. This has resulted in lax rules that do not protect land and life, as originally intended. 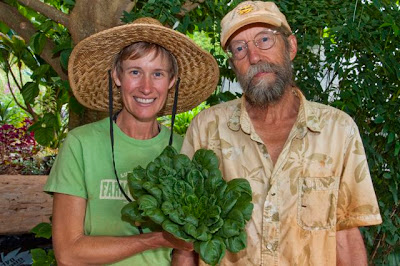 Lisa and Sun of One Song
There is no way every Walmart can be supplied on a regular basis (because we like to have that tomato when we want it, even if it’s out of season and flown in from 2000 miles away) without mono cropping vast amounts of land. The only way to do that is using tractors to sow (using fuel, spewing pollutants), and chemicals to feed and protect. 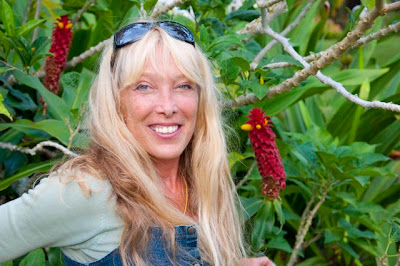 Exotic Fruit grower Adelle Sher
Science tried to make it easier for these farmers by creating genetically modified organisms. These GMO plants are resistant to pests. At first glance, this is good right? It minimizes the use of pesticides, saves the farmer money. Well, you need to use Round Up ready fertilizers and pesticides because, again, mono cropping is not sustainable. GMO plants are grown on a large scale to feed the hungry processed food beast as well as its use in making plastic, clothes and fuel. Along with the creation of GMOs, came the ability to patent life. 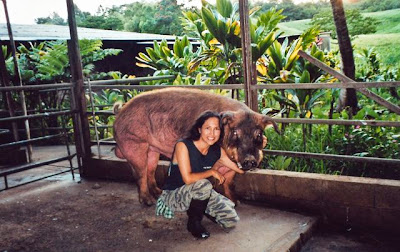 Herd Manager Valerie Kaneshiro
There are also “suicide” plants. Meaning they don’t make fertile seeds. But just like in Jurassic Park, life will find a way. GMO seeds are decimating farms in Mexico that have used heirloom seeds for generations. Their diverse crops are being slowly eliminated by GMOs. 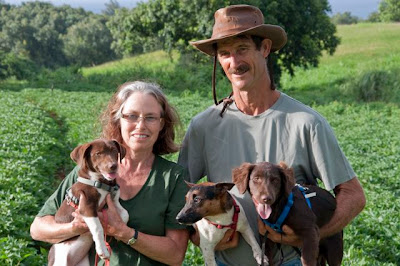 I could write an essay on this, there is so much more to the story. But this is a blog. Just know that your food purchases matter more now than ever. America and the world over has sustained itself by small family farms since agriculture was first cultivated in 7000 BC originating in Egypt, Western Asia and India. It is only recently that major corporations have total control over the global food supply. For example, did you know there are three companies that control the world’s fish supply? Not including, of course, the handful of small, family fishermen who feed their community one fish at a time. 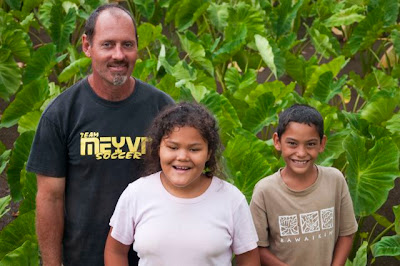 Taro farmer Adam Asquith with children Nihi and Sean
Buying local contributes three times more to the local economy. The best way to create a relationship with a farmer is to visit the farmers market. Farmers are passionate about what they grow and are happy explain what to do with unfamiliar fruits and veggies. Experiment, eat with the seasons, and make meal time something the family can enjoy together. 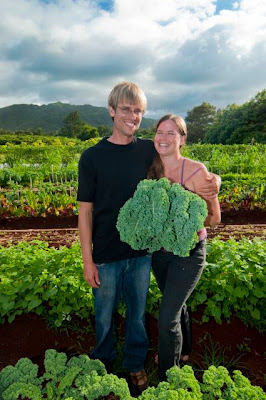 Levi and Kristin of Lono Farm
Posted by Aloha at 4:16 PM