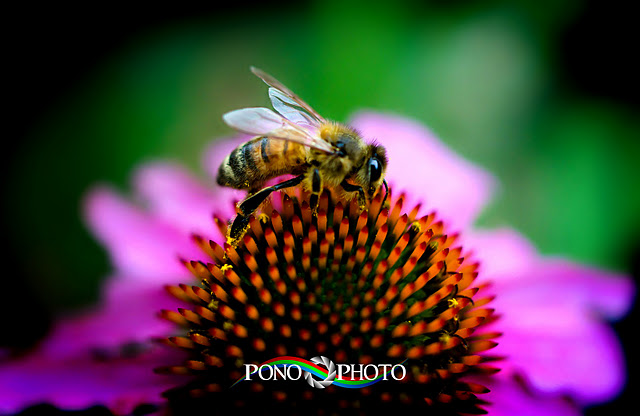 Dear Dad,
It’s been raining a lot lately. Big, gushing storms with thunder cracks that vibrate the house, and lightning flashes at once through the east and west windows. This morning we woke to a steady rainfall, and a monster muddy puddle in the middle of the driveway.
Dan and I are sleepy-eyed and crunchy because we’ve got a handful of clients who want stuff now. Yesterday, Dan spent his time on the couch hunched over the cedar chest you and mom gave us, processing photos for the Farm Bureau. I wrote two Jazzercise articles, and did some price negotiating on Dan’s behalf.
We are up early because we have to drive through the tree tunnel and into Koloa town, just before Poipu, to shoot a video and some photographs of a beekeeper. Dan was a little cranky by the time we got in the car. Turning the ignition, the voice of Chris Cornell filled the jeep, singing, “To be yourself is all that you can be.”
The rain had stopped as we headed out, and the sun was starting to break through the silver clouds, the ocean winked in the distance. Warm tropical air tousled our hair, and Lucy’s ears flapped in the wind. She likes to stand on me, her paws hanging over the lip of the jeep’s window, and surf the scents floating on the air. As we splashed down the wet roads, the island started working it’s magic on us, and soon, Dan was singing along.
By the time we got to Koloa town, the rain was back and I was wishing for my hoodie. I didn’t need to worry though because Chris, the bee whisperer, has us get into zippered bee suits complete with veils. We had one pair of gloves, and since Dan is allergic to bees, I gave them to him. 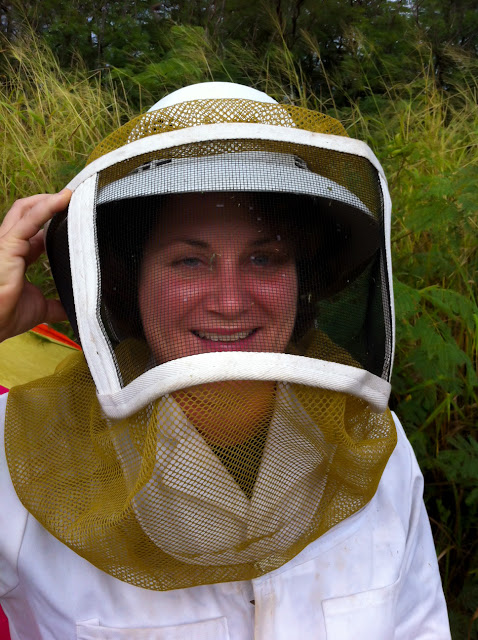 A wide swatch of loam, it’s topsoil loose and scattered with leaves, stretched out before us. Twenty stacks of bee hives lined the perimeter. We stood under the canopy of trees, and pointed our cameras to Chris. Dappled sunlight danced across his forehead as he talked about bees. 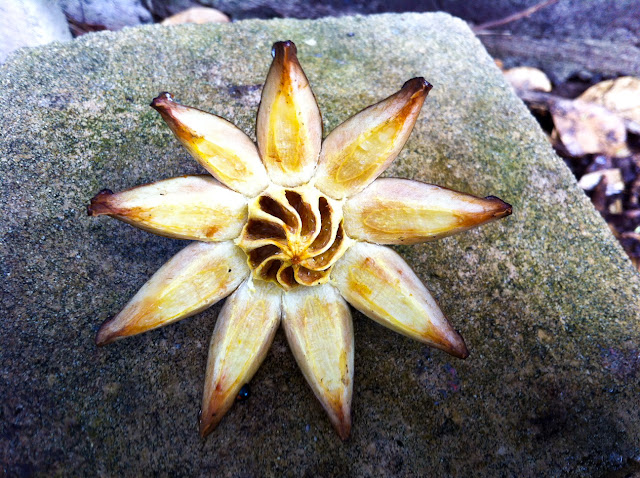 I have no idea what type of flower this was, but it looks cool!

Chris has five bee yards; one in Wiamea, one in Kalaheo, and three in the Koloa/Poipu area. In one hive, there is a queen, and about 15,000 bees. He hasn’t noticed a decline is his bee population, which he has been maintaining for 10 years, and he thinks it’s because he doesn’t use docile bees. 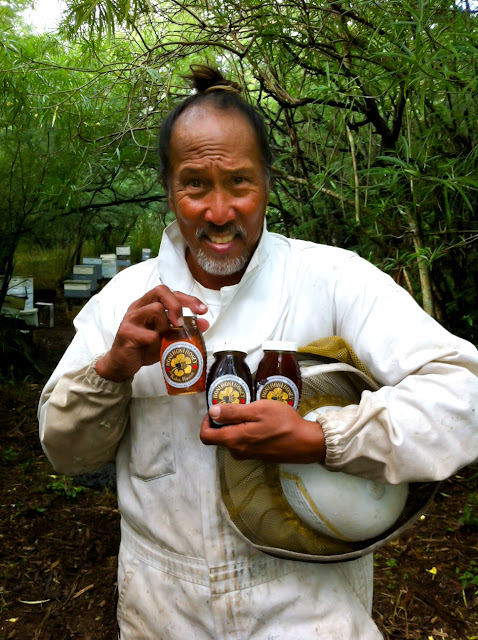 Bees are bred to be less aggressive, so they can’t protect their hives. Chris’ bees are the way nature made them, full of aggression and power. These bees have the strength to fight off pests that try to invade their home. His bees stand guard at the entrance to the hive, and send the varroa mites, ants and mice to suckle something else. 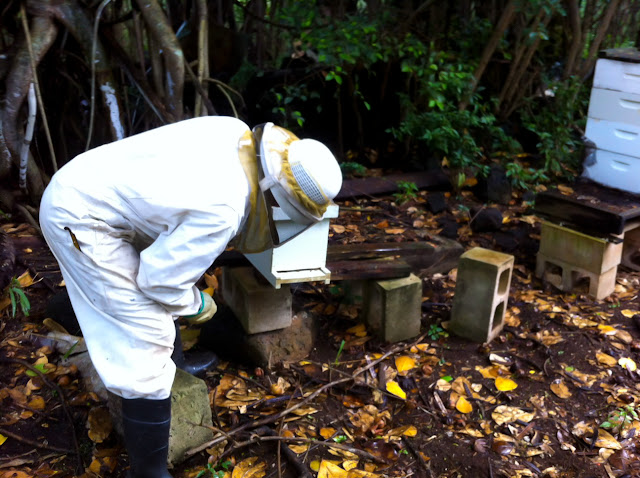 Dan and I nervously watched as Chris took the top off a hive. I imagined 15,000 bees flying out in an angry swarm. Dan imagined getting stung, and going into anaphylactic shock.
As Chris smoked the bees, he said it calms them down. The bees think there is a fire, and begin to suck up honey before taking flight. If you want to see a bee tongue, check out the picture Dan posted on his blog today. It’s the bee on the far right, if you enlarge the picture (by clicking on it) you can see his little tongue. 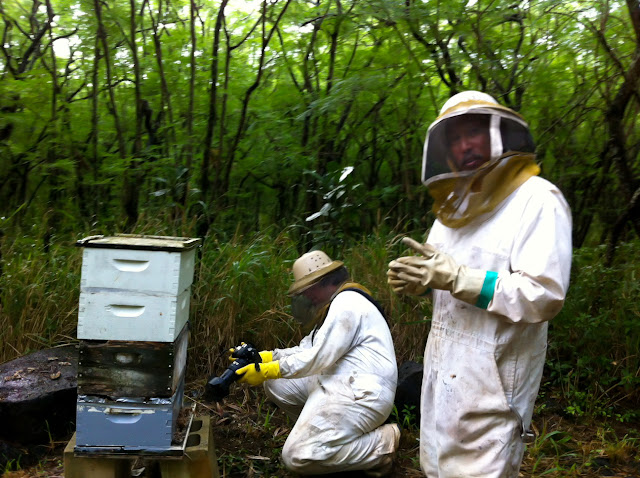 The bees happily slurped up their sweet nectar and paid us no mind. Dan and I had our camera lenses in there, and got some great video and photos. Chris is a pretty funny guy, and he was not taking this “Kauai Grown” thing seriously. I’ll post the video once I finish it which should be this Thursday. 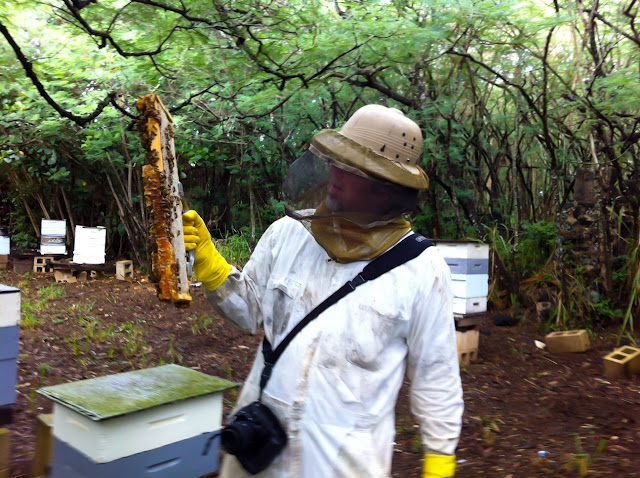 So proud of Dan for overcoming his fears!

I moved around front so Dan could get some shots, and a bee slammed into the knuckle on my left index finger. “Don’t freak out!” I said loudly, more for myself that anyone else. “I just got stung!” I watched the bee bear down, inject his venom, and fly off, leaving his stinger in my finger. It hurt.
Chris calmly asked me to walk away from the hives and towards our cars. They react to aggression, and when they smell the sting, they’ll sting again. They are the ultimate protector, since the bee will die once it stings you. 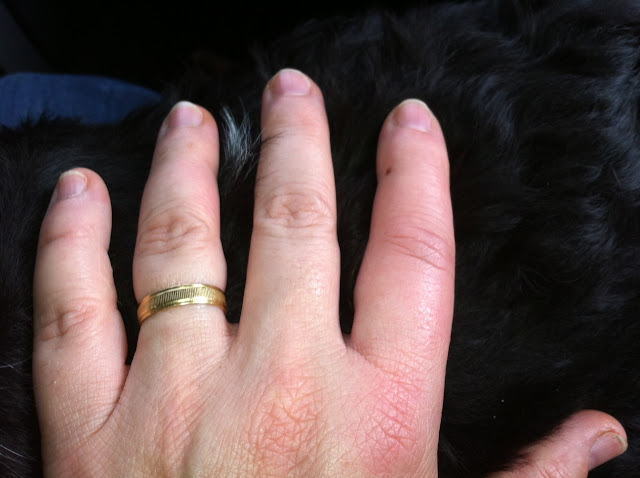 At this point, my index finger was swollen and red from my fingernail to my knuckle.

Using a blunt tool to scrape the stinger out, Chris said it was important not to pull it out. There is a sack of venom at the end of the stinger, and if you pull it out, more venom will get in.
It’s been just over six hours, and my finger is swollen, as well as my middle finger and thumb. It has also spread to my bottom knuckles and I can barely flex my hand. It still hurts. Dan keeps telling me to take Benadryl, I keep forgetting. 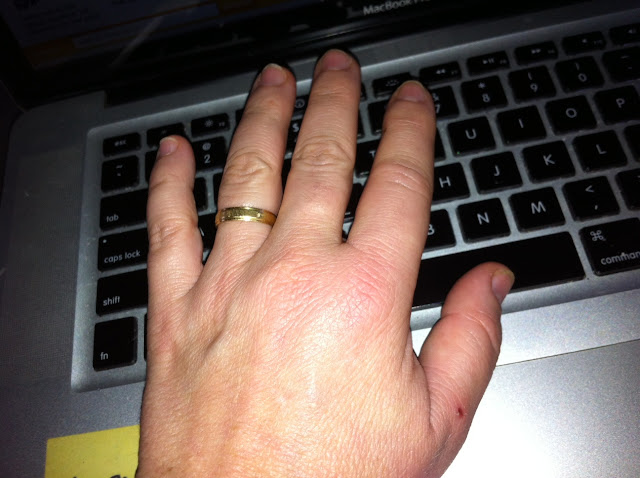 No longer red, but swollen and painful.

I don’t know how I managed to get stung for the first time at age 45, but I know I don’t want it to happen again!
Love to you and mom, I miss you guys! 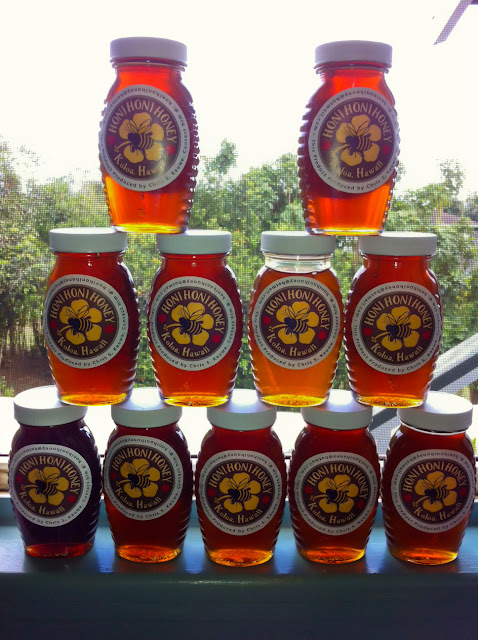 A little honey love.
Posted by Aloha at 6:38 PM