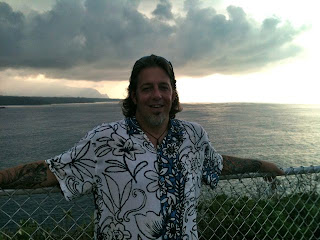 Yesterday we headed into the afternoon heat with the intention of snorkeling. We decided to do something closer to home instead of driving all the way to the north shore. Lydgate Beach Park is close and we heard it's a great place to snorkel. We forgot it was mothers day so the park was loaded up with folks, the waves were rough and the only place to snorkel was in the "kiddie pool" with a lot of other folks. We decided to go see Iron Man 2 instead.
As we pull up to the small theater (4 screens) we see a long line wrapping around the side of the building. Deciding to give it a shot, we stand in line. A man comes out and says seating is very limited, we may not get it. So, we head back home. We wanted to do something so we had drinks at our favorite bar the Oasis in the Sheraton Beach Resort. It's completely open and backs right to the beach. Perfect! 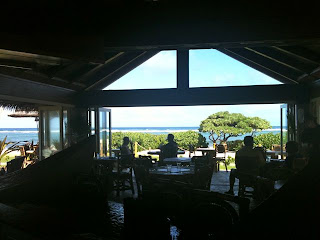 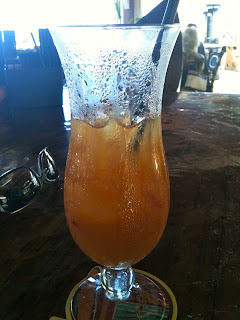 Three Mai Tais and several apps later we are making some friends. Early on, sitting at the bar we met Scotty. We had seen him before at the Home Depot and learn he is a DJ for the local community radio station KCCR. His show, Surf Stories, is about surfing. He interviews big time surfers all the time. We are impressed when he says he interviewed Laird. His family, originally from Florida moved to Colorado before coming here 12 years ago.
Jenny and Joel, the bartenders, have friends and family at the bar. Jenny's friend Amy and Amy's boyfriend Zach are to our right and live in town. Joel's mom Bobbi, sister Jen and family friend Mark (who Bobbi calls her second son) are to our left. We made instant friends with Bobbi who collects sea glass and shells when we gave her some we found earlier in the day. Jen and Joel have dogs and we plan play dates with Bobbi. Jen is an event coordinator and wedding planner at a garden up on the north shore so we make plans to go check that out.
Today is my first day working for the farm, after a quick chat with Jillian I will get to work. At 2pm, Dan and I are driving about 45 minutes south to meet with the folks I am doing the catering job for. They want to sample my macaroni potato salad and poke to make sure it's local style. Then we are heading over to the boat house, where the party will be, to meet with the owner and check out the kitchen.
I am thankful for my friends and husband who can kindly tell me where I can improve. Realizing that I am a perfectionist and of course struggling with the transition of moving here, I am able to let go. And look, 3 posts in 2 days! 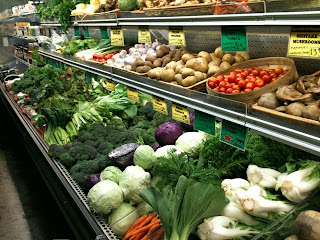 The produce isle at Papayas looking to the left, Dan is getting it mostly local. Jillian's book choy, carrots, beets, kale, onions, daikon, bananas, papayas, dill are on display. Going into the store and seeing produce you've grown and or harvested is as cool as seeing a spot you edited on air! 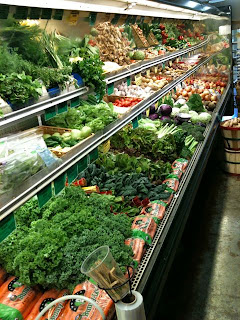